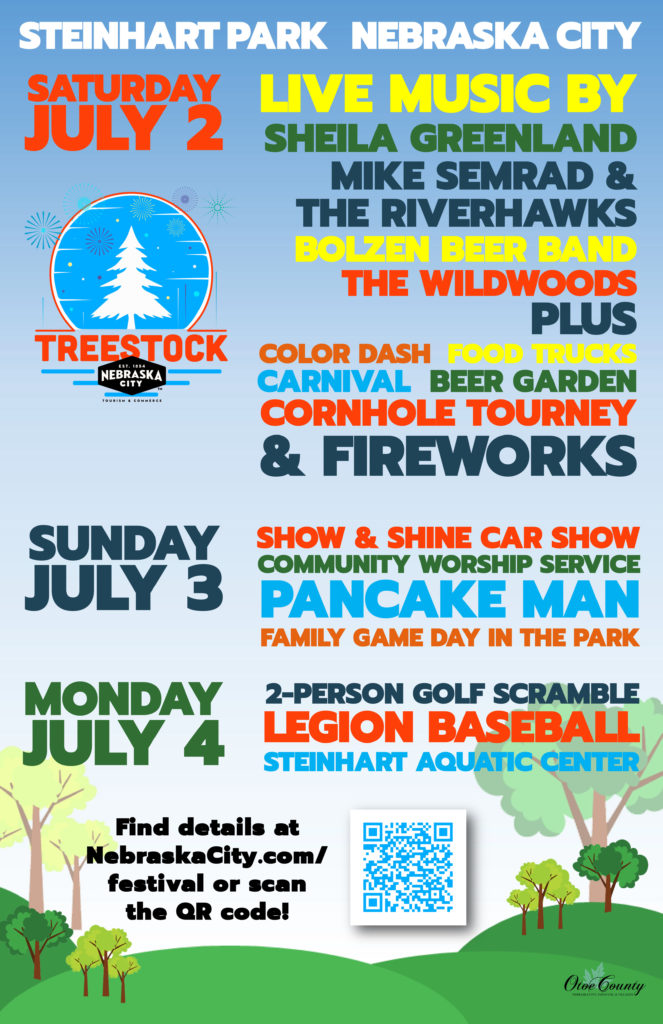 A small-town celebration of freedom the way George Washington intended. Complete with live music, family games, a cornhole tournament, and an hour-long fireworks extravaganza of, yes, extravagant proportions! We are turning our traditional one-day Independence Day Celebration into a three-day event not to be missed!

1pm – Kicking off the day is the incomparable Wildwoods, an enchanting Folk/Americana duo based in Lincoln, Nebraska, whose flowing songwriting tandem has been praised by Paste Magazine as “focused and charmingly human”. The Wildwoods’ delicate melodies and descriptive lyrics come from nature, love, experiences from the road, and growing up in Nebraska.

3pm – Get your German lederhosen and of course hit the beer garden for the great Bolzen Beer Band, bringing a polka-rock flair of the unbelievable to this year’s Treestock! Internationally known for bringing one of the greatest shows on the planet, Bolzen Beer Band is always up for turning heads and shaking up the “norm” of the polka world. Don’t miss this show!

5pm – Mike Semrad & the Riverhawks, bring a style of soul and R&B to the mix, hitting the stage at 5pm. Mike Semrad, also currently of The Bottle Tops, dips into his love for 60’s and 70’s soul music, with an all-star lineup of some of Nebraska’s greatest players. Be ready to dance and dip, and feel the groove.

7pm – Sheila Greenland’s original music is pop/country, and she also performs covers of songs across many genres. “Don’t underestimate or speculate on when a girl rolls up her sleeves and takes on the world in her favorite boots.”