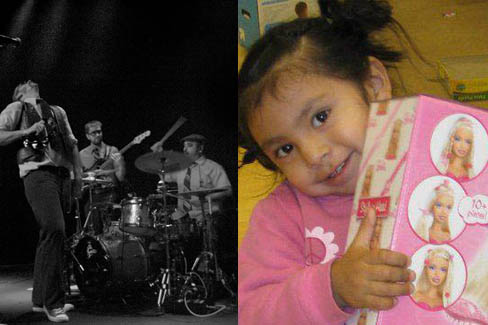 About the Toy Drive:
The Toy Drive for Pine Ridge is a 501(c)(3) non-profit organization that collects and delivers toys for children of the Pine Ridge Indian Reservation in South Dakota, and raises donations for heating, clothing, food, and educational resources for residents of the reservation.
The toy drive started in 2003 with Larry Dunn—an Omaha musician also known as Lash LaRue—a friend and a small pick-up truck.
Dunn became aware of the extreme need of the residents after spending time on the reservation.

The U.S. Census Bureau lists Pine Ridge as the most poverty-stricken area in the United States. It isn’t unusual to see frost on the inside of reservation homes during the harsh South Dakota winters. Food and heat are often scarce. Medical care is limited and without easy access. Dunn also learned that because of all this, very often children of Pine Ridge had no holiday gifts.
In 2003, Dunn arranged a benefit concert to collect toys for Pine Ridge children. Several of his musician friends agreed to perform at the concert. Approximately $500 in cash was collected, along with a large selection of toys.
The toys were loaded into his friend’s camper pick-up and made the nine-hour trip to the reservation from Omaha. Later, Dunn told of hearing a very small boy say to his mother during the toy giveaway: “See, Mom, I told you Santa wouldn’t forget.”

Each year has added more concerts and other events, such as a radiothon and concerts outside Omaha. Because of the growth of the Toy Drive, Dunn expanded its reach on Pine Ridge: providing resources to a medical clinic on the reservation, assistance for elders, including a heating fund, and educational resources for schoolchildren in Pine Ridge. David Swallow Jr., a Lakota spiritual leader and Medicine Man from the Porcupine District, organizes gift distribution in the middle of December.
Dunn and the Toy Drive were recognized by the United Way of the Midlands in 2010 at their 55th Annual Volunteer Recognition Luncheon for representing top community spirit and volunteerism in an ethnic population.
In 2011, Dunn partnered with a Pine Ridge school to provide donations of books and other educational resources, along with donations to cover school fees for families unable to pay. The Toy Drive for Pine Ridge received its first corporate grant in 2012 from the eBay Foundation to help continue this mission.
What began as one person’s wish to provide for children growing up in poverty became an official non-profit organization. An organization that so far has relied heavily on community donations and volunteer efforts to assist residents of the Pine Ridge Indian Reservation.
“If I don’t go back, I don’t know if someone else is going to,” Dunn said. “There was one year a little boy came up just crying his eyes out, and after a while I figured out all he wanted was a ball. I rummaged around and found him a soccer ball and he spent the whole rest of the day with one arm around the soccer ball and the other arm around my leg, just grinning ear to ear. And that’s the stuff that keeps you coming back.

“Just a soccer ball. I have a hundred stories like that.”

Though they’re from Omaha, Nebraska, Satchel Grande sounds like they’ve lived the majority of their lives on Mars, or The Mighty Boosh’s Old Gregg’s lair.
Yes, Satchel Grande has an electronic sound that’s more Breakbot than Daft Punk. They could be the perfect gateway band for those listeners looking to traverse the realm of ’70 disco-inspired dance music to taste generously reined-in funk. Consider them the toe you dip hesitantly into the hot tub of dance-funk. Beginning as a one-man show and developing over the years into a full-fledged, ten-person funk/soul/pop band, these groove aficionados can now call themselves a musician collective.
The combination of guitars, sax, and some frisky keys, allows the music to play with a gleeful ebb and flow that echoes the mood of a damn good George Clinton/Chromeo remix.
Easily danceable and singable, Satchel Grande are straight-up the most fun(k) you’ll have shakin’ your tail feathers to.