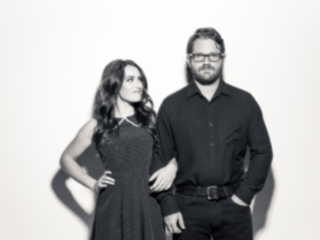 Nashville Row Omaha is building a community of country and singer songwriter music enthusiasts that want to bring up and coming Nashville talents to Omaha for live music events! This effort was inspired by travels to Nashville and the incredible music that could be seen any night of the week in the local bars and restaurants that surround Nashville’s famous “Music Row” where many historic recording studios are located. Please scroll down to see the whole story and view a few of the Nashville based talents we are trying to attract to Omaha. The first step is to join our contact list to express your interest. We will be looking for your feedback on which artists to try and bring to Omaha and choose the best venues for those shows!

The Young Fables (TYF) are a country duo comprised of three-time American Idol vet Laurel Wright and accomplished guitarist and vocalist Wesley Lunsford. The act hails from Maryville, TN and calls Nashville homebase. Nashville Row Omaha has “outkicked it’s coverage” on this one. You will go away knowing that you really saw something special. Beautiful vocals with incredible country guitar playing. Great original music with some great covers of your favorite traditional country music!

“She’s as good as any country singer out there!”

Quickly becoming a breakthrough face on the country scene, outlets like the world-renown “The Boot,” “NASH Country Daily,” the UK’s “Think Country” and TN Vacation all spotlighted this emerging act. Capturing the ears and attention of two of the industry’s most revered names, Keith Urban said they “had me immediately” and Big Machine CEO Scott Borchetta praised “a flawless vocal.”

The fan-favorite “Covering Your Tracks” video series solidified Laurel and Wesley as prolific online performers and a stand out act in Music City. Securing a win at the Nashville finals of the NASH FM nationwide NASH NEXT competition, the radio giant embraced the duo as an America’s Morning Show Ty, Kelly and Chuck favorite, regularly highlighting The Young Fables’ songwriting strength in the Ten Minute Tune segment.