The Andy T Band feat. Alabama Mike and at Chrome

The Andy T Band feat. Alabama Mike and at Chrome 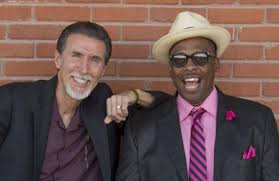 Texas guitarist Anson Funderburgh is joining the Andy T Band featuring Alabama Mike for the group’s 2017 summer touring, including a stop in Omaha Thursday, July 20th at Chrome Lounge at 6pm. He been making guest appearances with Andy Talamantez, aka Andy T, since 2011.
Funderburgh produced three albums for Talamantez’s previous band, the Andy T ̶ Nick Nixon Band ̶ 2013’s Drink Drank Drunk, 2014’s Livin’ It Up and 2015’s Numbers Man. The Funderburgh and Andy T ̶ Nixon Band collaborations received Blues Music Awards nominations and Blues Blast Awards nominations.
The coolest ride from some of the coolest guys you’ll meet! The Andy T Band featuring Alabama Mike head to Omaha for a 6pm show at The Chrome Lounge this Thursday. Come on out and see why the band was nominated for Band of The Year at the 2016 Blues Music Awards. Alabama Mike was also nominated for Traditional Blues Male Artist of the year at the 32nd Blues Music Awards. Don’t miss the Omaha debut of this high tenor Blues sensation!
The Andy T Band featuring Alabama Mike is a potent new blend of blues talent. The group pairs veteran Nashville guitarist Andy Talamantez with the dynamic San Francisco Bay area singer Michael A. Benjamin, aka Alabama Mike.

There’s much more to savor on Double Strike. “Where Did Our Love Go Wrong,” featuring Benjamin at his most passionate, echoes the classic, swaying New Orleans rhythm-and-blues of Fats Domino.

Talamantez, a Los Angeles native who moved to Nashville in 2008, has been a gigging musician since his teens. After performing part time while he worked in the aerospace industry for 23 years, Talamantez took the full-time music plunge in 1997. His first seven years of touring musician included two years with Smokey Wilson and five years with Guitar Shorty. He toured internationally with other major blues acts.

When Nixon retired in 2016, Talamantez asked his peers if they knew a singer who could replace the ailing vocalist. Phoenix harmonica player Bob Corritore immediately recommended Benjamin, aka Alabama Mike. Benjamin sang in gospel sextet with his five siblings during his childhood in Alabama. A longtime student of the blues, he made his belated professional debut as blues singer in 1999.

After Talamantez’s first call to Benjamin, the singer didn’t know what to think. For one thing, he’d just released a new solo album, Upset the Status Quo, and planned to promote it as much as possible.

“Andy expressed his desire to work with me,” Benjamin recalls. “He was impressed that I came highly recommended. So, we sat down and chopped it up. I expressed my concerns. He told what he expected. We went back and forth.”

“Mike wasn’t sure about us,” Talamantez says. “But enough people who know us both told him that he needed to do this.”

“It seemed like a good fit,” Benjamin says. “Usually, starting out, that doesn’t work with a lot of people. You just don’t click. But we did a few gigs and we went in the studio. It’s working out good now.”

“I love Mike,” Talamantez says. “He’s got a great high tenor voice. He’s got a really nice stage personality. He works the audience. And Mike is a really nice guy, polite and sweet. I’m proud that he wants to be with us.”

“There are a whole lot of excellent musicians out there,” he says. “But if they don’t vibe and work together, it’s not going to be as good as a band with people who complement one another Collectively, the vibe and the energy our group has is great. Everybody gets along well.”

For the Double Strike album, Talamantez made the unusual choice of featuring both the incoming Benjamin and retiring Nixon.

“Nick had good and bad days in the studio,” Talamantez explains. “It was part of the illnesses he was experiencing.”

Talamantez planned to bring Nixon to the studio again to re-record several songs. But before that could happen, the singer experienced more illness.

“So, we kept the best six songs that Nick did, which are all great, and Mike sings the other six,” Talamantez says. “It works really well.”

Talamantez sees having Nixon and Benjamin share the Double Strike vocals as a way to welcome Benjamin and pay affectionate homage to Nixon. “This is Nick’s last recording, and it’s a good transition from Nick to Mike,” he says.

“We’re a group now,” Benjamin says. “We’re going forward with it. I know it’ll be great.”

Texas guitarist Anson Funderburgh is joining the Andy T Band featuring Alabama Mike for the group’s 2017 summer touring. He been making guest appearances with Andy Talamantez, aka Andy T, since 2011.

“I respect Anson as much or more than any musician I’ve ever known,” Talamantez says. “He has a certain sense about what he wants to hear. When other producers ask to work with us, my answer is, ‘Thank you, but as long as Anson can do it, we’ll keep working with him.’ ”

A native of Plano, Texas, Funderburgh led his band, the Rockets, from 1978 to 2006. The group released more than a dozen albums via the Hepcat, Black Top and Bullseye Blues labels.

For 20 years, the Rockets featured blind blues singer Sam Myers. After Myers’ death in 2006, Funderburgh took a seven-year hiatus, spending the time with his family. He returned to performing in 2011, reforming the Rockets and appearing with the Eric Lindell Band.