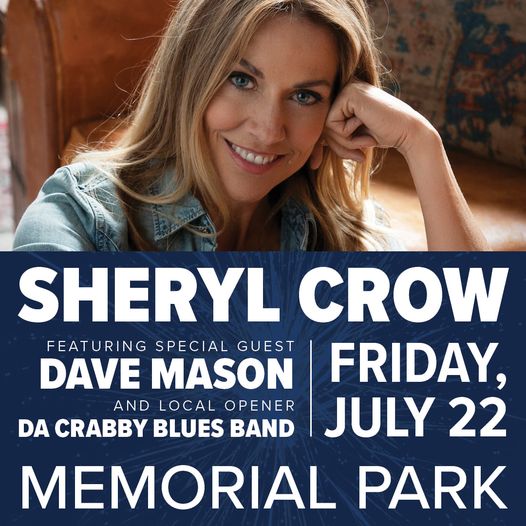 Sheryl Crow will be the headlining act for Omaha’s annual Memorial Park concert. The “City of Omaha Celebrates America” concert is scheduled for Friday, July 22. The event will also feature Dave Mason, as well as local act Da Crabby Blues Band. The concert will again be free to the public and includes a fireworks show, set to start around 10 p.m. Local bands and musicians will also be able to submit to music videos to be shown on video screens throughout the day.

A nine-time GRAMMY AWARD recipient, Sheryl Crow is an American music icon. Her first nine studio albums have sold 35 million copies worldwide; seven of them charted in the Top 10 and five were certified for Multi-Platinum sales. In addition to such No. 1 hits as “All I Wanna Do,” “Soak Up the Sun” and “The First Cut Is the Deepest,” Crow has lofted 40 singles into the Billboard Hot 100, Adult Top 40, Adult Contemporary, Mainstream Top 40 and Hot Country Songs charts, with more No. 1 singles in the Triple A listings than any other female artist.

Dave Mason left Traffic in 1969 to pursue a solo career in the U.S. Dave has penned over 100 songs, has 3 gold albums: Alone Together, Dave Mason, Mariposa De Oro, and platinum album Let It Flow, which contained the top-ten single “We Just Disagree”. In addition to cranking out hits, Dave has performed on, or contributed to, a number of famous albums, including: The Rolling Stones’ Beggars Banquet, George Harrison’s All Things Must Pass, Paul McCartney and Wings’ Venus and Mars, and Jimi Hendrix’s Electric Ladyland.