Sammy Figueroa Latin Jazz Ensemble at Jazz on the Green

HomeSammy Figueroa Latin Jazz Ensemble at Jazz on the Green

Sammy Figueroa Latin Jazz Ensemble at Jazz on the Green 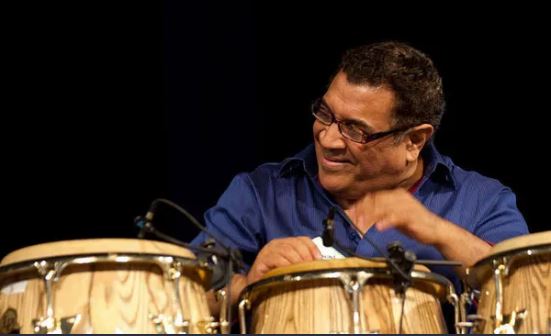 Sammy Figueroa has long been regarded as one of the world’s great musicians. As one of the music’s leading percussionists he has played on countless records and is well-known for his versatility in a multitude of musical styles. Besides playing with some of the world’s greatest pop stars, such as David Bowie, Chaka Khan and Mariah Carey, Sammy has also played with a multitude of distinguished jazz artists including Miles Davis, Sonny Rollins, Quincy Jones, George Benson, and many, many more.

When Sammy plays percussion he tells a story, creating a playful conversation with other musicians and taking the listener on a musical journey . As one of the world’s greatest congueros he is currently considered to be the most likely candidate to inherit the mantles of Mongo Santamaria and Ray Barretto.

Sammy Figueroa was born in the Bronx and raised in Puerto Rico, the son of romantic singer Charlie Figueroa. After many years as New York’s number one percussionist, in 2001 Sammy relocated to South Florida. It was there that Sammy discovered a rich treasure trove of amazing Latin jazz virtuosos from Cuba, Venezuela, Brazil, Colombia and Argentina, and was inspired to find his voice as a solo artist. Putting a band together with the best players in town Sammy Figueroa and His Latin Jazz Explosion debuted at the Hollywood Jazz Festival and since then he has never looked back.

“Figueroa proves to have a distinguishing technique and voice of his own, making him the leading percussionist in Latin jazz today”
– AllAboutJazz
Sammy’s first album, “…and Sammy Walked In”, included a title track written in his honor by Michel Camillo. Three more albums followed: “The Magician”, “Urban Nature” and “Imaginary World”. All three of these albums are notable for brilliant compositions and arrangements by Venezuelan composer/musicians Silvano Monasterios on piano and Gabriel Vivas on bass. “And Sammy Walked In” and “The Magician” have both been honored with Grammy® Nominations for Best Latin Jazz Album.

In a departure from his usual energetic and ‘hot’ Latin jazz approach, in 2014 Sammy recorded and released “Memory of Water”, a new age album of Sammy playing the eclectic and celestial-sounding Hangpan. This album reflects ‘the other side of Sammy’, and his passionate interest in spirituality, alternative science and unusual instruments.

Sammy’s most recent album “Imaginary World” was released in June 2015. Throughout 2016 Sammy has been preparing his fifth album, which he plans to take in a new direction including vocals, urban and r & b mixed with a Latin pop approach. He plans to include musicians from Cuba and Puerto Rico and to record in Havana, Cuba.

In addition to his two Grammy® Nominations for Best Latin Jazz, Sammy has been honored with numerous awards. These include two NARAS Awards for Percussionist of the Year, two Drummie Awards for Best Hand Percussion and the Jazz Journalists Association Award for Best Percussionist.

Sammy appears in several important books on music and its legends. His relationship with Miles Davis is described at length both in Miles’ own words in his autobiography entitled “Miles”and in “The Last Miles: The Music of Miles Davis From 1980-1991” by George Cole. Anecdotes about Sammy abound in Paquito D’Rivera’s amusing book “My Sax Life”. Sammy has also been included in The Grove Dictionary of Jazz.