Ross Kleiner and The Thrill

HomeRoss Kleiner and The Thrill

Ross Kleiner and The Thrill

Ross Kleiner & The Thrill are no mere revivalists. Like Nick Curran, JD McPherson, and Nikki Hill, the Minneapolis, Minnesota-based Kleiner infuses vintage forms with unexpected accents, producing music that is both respectful of its sources and strikingly original. The combination of hot rhythms with cool lyrics, the judicious application of modern sounds and production values, and the energy of an H-bomb, yields explosive results in The Thrill’s wild, exciting brand of hi-test roots rock.The charismatic Kleiner fronts a versatile and dynamic group, formed in the fall of 2012 with Victor Span, whose resume includes stints with Hubert Sumlin, James Cotton, Buddy Guy, and Nick Moss, on drums; Lucas Christiansen on the big bass; and a devastating secret weapon in guitarist Cornelius Watson. Listeners seeking something a little off the beaten path have been rewarded by the Thrill’s electrifying live shows, where vintage vibe meets up-to-date attitude. The debut album You Don’t Move Me, which captured the group’s fresh sound and Kleiner’s solidly rocking, melodic material, was released late in 2013 to rave reviews.As Blues Music Magazine’s Tom Hyslop wrote, the band “approaches rock ‘n’ roll music with a fan’s heart and an expert’s ear, and gets it entirely right.” Kleiner appreciates the rockabilly classicism of Elvis Presley, Johnny Burnette and the Rock ‘n Roll Trio, and Gene Vincent, but that represents only one aspect of his influences. Add to it the essential inspiration of iconic bluesmen like Howlin’ Wolf and innovative rockers like Bo Diddley, with dashes of surf, spaghetti Western, Latin, swinging pop, and much more. The dangerous edge of the Paladins, the brooding exoticism of Chris Isaak, the raw attack of the Blasters, and the brash, no-filter style of Nick Curran all figure into Kleiner’s musical cocktail shaker, yet his potion remains unique retro-modern American music, done in all the right ways. 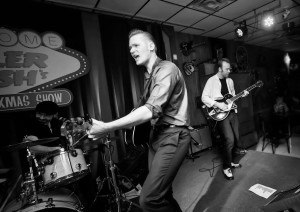