Mayes is known for her powerful lyrical ability that gives life to the words she sings. Her insightful sweet and edgy vocals paint pictures of heart on her sleeve sincerity and a road well-travelled.

Mayes continues to bring her brilliant songs, impressive guitar skills, and passionate performances to stages across the globe. With no intention of burning out or fading away, Romi Mayes has proven she is here to stay. 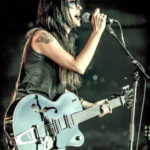