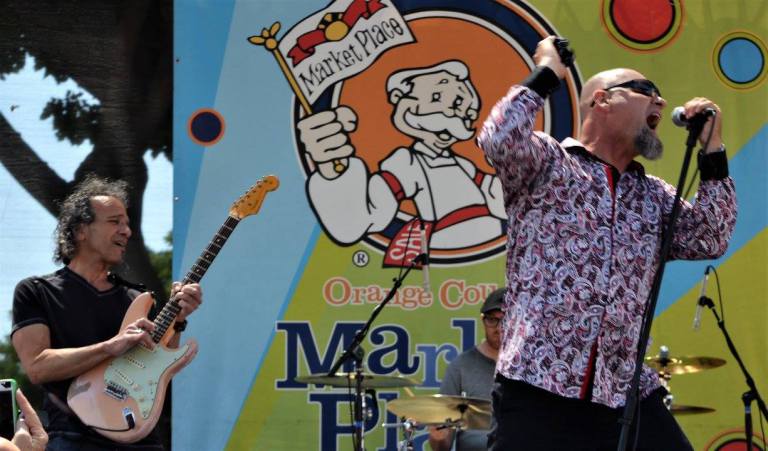 Orphan Jon and The Abandoned is an American Roots & Blues band from Southern California. Recently signed to SoCal’s highly respected and well established blues label Rip Cat Records; a label that has such legendary and iconic blues artists as The Blasters, Kid Ramos, Lynwood Slim, Barry Levenson, White Boy James, KK Martin, Blue Lunch, as well as contemporary artists as John Clifton, Black Market III, Alastair Greene, Johnny Mastro and Mamas Boys, Jade Bennett and Gino Matteo. OJATA is quickly becoming a go to band because of the high energy and passion they display while performing. Roots and Blues is their life blood, and it shows in their ever popular originals; and the few selective covers, they bring to every show. It is the bands goal to captivate the audience from the first note struck until the last chord is played while entertaining them both musically and visually. OJATA simply put, is a very unique band. Unique in that they express themselves in such a way; that’s so different, that many have said after seeing them perform live, they’ve never seen nor heard anyone like them before. And not only do they capture the traditional fans of the blues; which they so love and cherish, but also have been gaining more and more of a younger audience due to the Roots style of music they showcase everywhere they’ve been honored to play. When you see and hear OJATA you will be taken on a journey through the ups and downs, the twists and turns, peaks and valleys of the vibrancy of love and everyday living through their music. They are a rare breed full of spirit and charisma, and they put on a show that is both energetic and captivating with a tight sound like no other.
Front man Jon English, can be moving, emotional, heartfelt and intense at one point, and then soothing, soulful, lustful and desiring at another point in both his body language, lyrics and vocals.
Add to Jon’s performance the journeymen experiences of Bruce Krupnik; with his flowing, rhythmic, harmonious blend of guitar string manipulations that invites your soul on a cosmic colorful expedition to places you might’ve never been before, the rhythm section of Tony Jack Grigsby; with his steady uplifting, driving, both subtle and powerful, bass playing that takes your heartbeat on a vast rousing journey, and Mike Malone; with his energetic, captivating, influential dynamics of the drums and you have The Abandoned.

Orphan Jon and The Abandoned is a band that totally captures the essence of what Americana Music is all about; hard work, rough life, grinding days, moving souls, touching hearts and heartfelt love, day to day, and all the time.

Singer/Songwriter Jon English aka “Orphan Jon” resides in Bakersfield, California. He is the face, vibe, heart and soul of OJATA. He’s a passionate soul, and it shows in his performances and by his songwriting. Roots and Blues is his true love. Although he doesn’t have the vast years of experience in the blues genre as most of today’s popular music artists, it most certainly can be said that he has lived the blues in a way unlike any other. Born in a county hospital in Bakersfield, Ca. in the summer of 1965, he was abandoned along with his 3 older brothers before the age of one. Placed in an orphanage by the state and bounced in and out of several homes before finally being adopted at the age of 10, he learned at an early age what being alone, forsaken, abused, and dealing with the troubles of life truly feels like. Things never did get better for him even after he was adopted. His adopted father was rarely around, and his adopted mother was very abusive during the 5 years she was in his life, both physically and emotionally. And though she treated him in such a manner; she still had a huge positive influence on his musical life. Because of her love for music she would encourage him to sing and perform the songs of the artists she liked. This is something he would do often. For it was during these moments; that he discovered, there would be some normalcy and relief from the abuse he suffered almost daily. And it was during these times she showed him a little love, compassion and motherly affection. She introduced him to the poetic harmonies of The Everly Brothers and The Temptations, the cool surfer music of the Beach Boys, the soulful melodies of Motown’s Marvin Gaye and Mr. Dynamite himself, The Godfather of Soul, Mr. James Brown. But, it wasn’t until he would sneak out of his bed late on a Saturday night to catch a glimpse of the popular show Saturday Night Live that he discovered the music that would years later help him cope with the anger, bitterness, sadness and emptiness of his youth. “Joliet” Jake and Elwood Blues debuted on SNL in January of 1976. They were something he had never seen nor heard of before. Both their music and stage presence quickly captured his attention. And it was then that he found the music of his life. The passion, the soul, and pure self-expression of the music got a hold of him then, and it has never let go since. During his late teen years, he decided to not let the anguishes of his childhood be a negative in his life anymore. Instead, he took the past wrongs and began to make them into future rights. Nevermore allowing the bad to influence him, he turned his life around and discovered how he can tell his story in music and create in song what was hidden away from all to see and hear for many years, until now. His music is his self-expression of his life. He has said, “I was a motherless child that eventually found his mother. A mother for my early abused life, a mother for the hardships that abandonment brought, a mother that gave to me her unwavering love. This mother will never leave or forsake me; she will always be there for me, even when I hadn’t met her yet, she was there, she was always there, she is the Blues”.