Odds Lane at The Corner Bar

HomeOdds Lane at The Corner Bar

Odds Lane at The Corner Bar 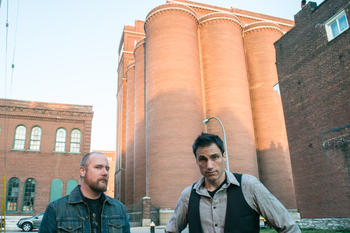 Start with a simple base of driving Blues Rock guitar riffs and funky R&B grooves. Next mix varying amounts of reggae, new wave, swamp boogie, and garage rock. Then serve with a melody that will delightfully linger on your palate long after it is finished. This is the music of ODDSLANE.

The band is the musical outlet of the songwriters Doug Byrkit and Brian Zielie. The duo worked together while in college studying music, subsequently touring both nationally and internationally with various artists. After recording at legendary Sun Studios, they released the first of several projects as independent songwriters in 2004.

Last Night On Cherokee, released in 2016, is the second album as ODDSLANE and an exciting chapter in the band’s career. Their 2012 release Dark Matters garnered Byrkit an ASCAP Plus Songwriting Award and an endorsement deal with custom guitar pick maker Steve Clayton Inc. The band also appeared on The Chevy Music Showcase and signed multiple licensing deals with networks such as MTV, Oxygen, E, A&E, WE, Oxygen and Fox Sports.

Following Dark Matters, the band was eager to broaden its sound. A well received reunion show with Ruf Records artist and former band mate Mike Zito inspired Byrkit and Zielie to delve deeper into their South St. Louis funk/blues roots. After an intense period of songwriting and experimentation, ODDSLANE emerged with Last Night On Cherokee. This invigorating addition to the band’s catalogue was recorded at Sawhorse Studios in St. Louis, mixed in Los Angeles by Grammy Award winning producer David Z (Prince, Johnny Lang, Etta James), and mastered in New Orleans by Grammy Award winner David Farrell (Arcade Fire, BuckWheat Zydeco, Royal Southern Brotherhood). The album has subsequently been released on Bongo Boy Records out of New Jersey and has been receiving rave reviews from fans, music reviewers, and blues lovers from all over the world. The video for the first single “Take It Slow” was released worldwide on BongoBoyTV.