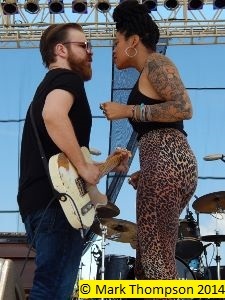 Those who have seen Carolina girl Nikki Hill sing her ass off agree—this isn’t just another newcomer on the scene, this is a ‘whiplash’ moment. Where did this fireball come from? Why haven’t I heard of her before?
If you haven’t heard of Nikki Hill yet, you soon will, and once you see her perform, you won’t forget her.

Hill and her band have been touring extensively following the independent 2015 release ‘Heavy Hearts Hard Fists’ and debut album ‘Here’s Nikki Hill’, released in 2013. With a no-filter energy, and explosive live show, they deliver a sound that will make you believe in rock ‘n’ roll again! Nikki’s unique voice—with raw rock and soul dynamics mixed with the strength, passion, and honesty of blues shouters of the past—steers the driving guitar and a tight rhythm section to create a breath of fresh air with their fast forward approach to American roots music.

Nikki Hill’s self-titled, independently released EP in June of 2012 created a heavy and sudden international underground buzz that the band has traveled with across America and overseas to Europe and Australia. Those four tunes penned by Hill, combined with memorable live performances, have drawn a wide range of people from every avenue and musical taste to their shows. Her enthusiasm for music is simply contagious. One club advertisement will call Nikki “The Southern Fireball”, “the New Soul Sensation”, “amazing R&B Shouter”, and even “the new Queen of Rock n’ Roll”.

If you haven’t heard of her yet, prepare for your ‘whiplash moment’. You have been warned.

Praise for Nikki Hill:
“Nikki Hill looks back to the most confidently grizzled retro sounds…Hill’s got too much passion to tidy things up, but she knows exactly what she’s doing.”
— SPIN

“When you have a powerful Southern soul singer with a penchant for AC/DC, you know you’re going to get something badass…A talent not to be ignored. Hell, she packs so much power, she’ll never let you.”
— PopMatters

“A total knockout, one of the best and most exciting records of the year.”
— Philadelphia Inquirer

“A fiery performer, channeling some of rock & roll’s most heralded voices, revamping the squalls, screams and shouting-at-the-devil of rock’s pentecostal roots to a blazing new take that she can rightfully call her own, a soul that owes as much to AC/DC as Aretha.”
— Okayplayer

“A powerhouse singer and killer live performer, Hill’s proudly retro and delivers her brand of soul-rock ‘n’ roll with expressive verve and, with the new songs, great variety and style.”
— Lincoln Journal Star

“A revelation…a spunky rocker with a thrilling voice, charged stage persona and a killer band,
which included her exciting guitarist-husband, Matt Hill.”
— Downbeat

“Impassioned…fiery soul and R&B with some rock and roll swagger thrown in for good measure.”
— AllMusic

“She has the chops to make a Lower East Side club feel like a Southern roadhouse.”
— amNY