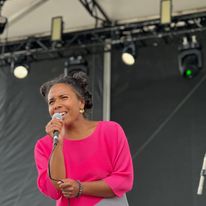 Mary Elizabeth Jo Dixen Pelenaise Kapi’olani Lawson also known as Mesonjixx, is an artist, composer, writer, performer, organizer and collaborator. Belonging to two diasporas of two hemispheres, she happily calls the U.S. Midwest home. While living in Chicago (2009-2014) she began songwriting and performing in a collective called EveryPeople Workshop. When she returned to Nebraska she began writing more song intentionally, and dabbling with short visual works to accompany her live performances. After creating a set of songs on piano and a short film, she began her journey in the uniquely placed and thriving House Show Culture in Lincoln, Nebraska. At this time she found interest in collaborating with other musicians on the scene — some of which she continues working with today.