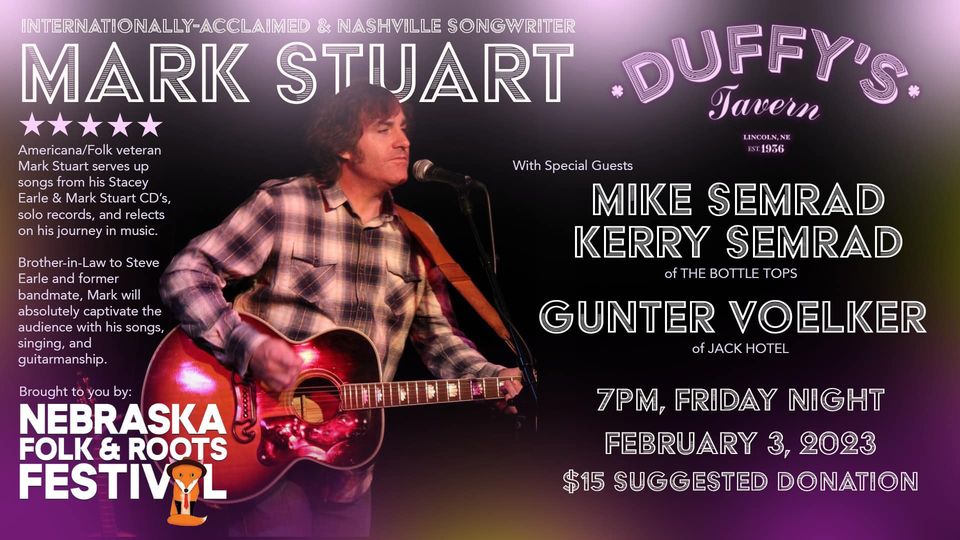 Friday, February 3, 2023. The Nebraska Folk & Roots Festival presents: Mark Stuart, with special guests Mike & Kerry Semrad of The Bottle Tops, along with Günter Voelker of Jack Hotel. This is an early show, 7pm-10pm, at Duffy’s Tavern. No advanced tickets, so arrive early. A Nebraska favorite, Mark Stuart, returns to the Capitol City for a very special appearance in one of Lincoln’s iconic music clubs.

Mark is an internationally-acclaimed songwriter, based out of Nashville, TN. Mark and his wife Stacey are veterans of the band the Dukes (of Steve Earle and the Dukes), which is also Stacey’s brother, Steve Earle. Mark’s live show is undeniably warming and filled with an obvious deep knowledge of the American classic songbook. Armed with clever acoustic guitar interplay, autobiographical songwriting, and humorous storytelling, Mark captivates your attention from the first moment he steps onstage. Based out of Tennessee, Stuart draws from blues, pop, country, rock, and more in their heartfelt music. The years of touring the folk/Americana circuit (playing 170 concerts a year) have given him a knack for reaching out to the audience in an intimate “come in to my living room” fashion.

Günter Voelker, of local favorites Jack Hotel, will bring his incredible songwriting craft to the show, honoring legendary songwriters such as Dr. John Walker and more, along with his original song catalog.