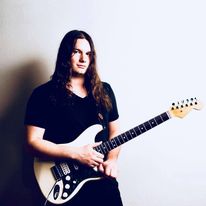 Lucas Parker is a rock / fusion recording artist and session guitarist based out of Denver, CO and Kansas City, MO. His energetic stage performance and unique playing style has gathered and held the attention of concert goers and electric guitar enthusiasts in the Midwest live music scene for 10 years. Leading the Lucas Parker Band and as a member of Groovement and Jessica Paige, Lucas plays an average of 100-150 shows a year and has supported numerous acts including: George Clinton & P. Funk, Public Enemy, Andy Frasco, Marbin, Tauk, The Nth Power, The Motet and many more. Lucas has earned a reputation as one of the hardest working performing and recording guitarists in the area and his long history in the festival scene has yielded a loyal fanbase of music fans and party people alike. Lucas has appeared on NPR Tiny Desk with Tech N9ne, as well as having performed on stage with Joe Bonamassa, Warren Haynes, Nikki Glaspie, Benny Bloom, and many others.