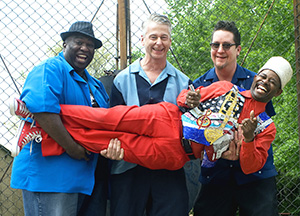 In Chicago, a city overflowing with unrivaled blues talent, world-renowned Lil’ Ed & The Blues Imperials have been standing tall for almost 30 years. The band’s big sound, fueled by Lil’ Ed’s gloriously rollicking slide work and deep blues string bending, along with his rough-edged, soulful vocals, is as real and hard-hitting as Chicago blues gets. The Chicago Sun-Times says, “Lil’ Ed & The Blues Imperials are the hottest purveyors of bottleneck boogie to come out of Chicago since Hound Dog Taylor.”

Lil’ Ed Williams comes to the blues naturally. His uncle, Chicago slide guitar king and master songwriter J.B. Hutto, taught him how to feel, not just play the blues. Nine albums and thousands of performances later, Lil’ Ed is now universally hailed as a giant of the genre. Lil’ Ed and The Blues Imperials—bassist (and Ed’s half-brother) James “Pookie” Young, guitarist Mike Garrett and drummer Kelly Littleton—have remained together for nearly 30 years (an extraordinary feat for any group), the band fueling Ed’s songs with their rock-solid, road-tested, telepathic musicianship.

The Big Sound Of Lil’ Ed & The Blues Imperials is the musically electrifying, emotionally intense and downright fun new album from the band Guitar Player calls “a snarling boogie-blues machine…they blow down the walls.” The CD features Lil’ Ed’s incendiary playing and playful, passionate singing, with the ragged-but-right Blues Imperials cooking like mad alongside him. Produced by Williams and Alligator president Bruce Iglauer, it is a tour-de-force of authentic, deeply rooted Chicago blues. Williams wrote or co-wrote all but two of album’s 14 songs, the other gems written by Uncle J.B. The Chicago Reader says the band’s music “is a soundtrack for dancing and celebration infused with a sense of hard-won survival.  Williams attacks his lyrics like he attacks his guitar: with bare-bones intensity that makes each word sound like a matter of life or death.”