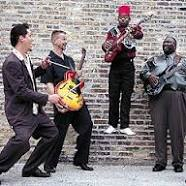 The group won the coveted 2009 Blues Music Award for Band Of The Year, the same honor they received in 2007.