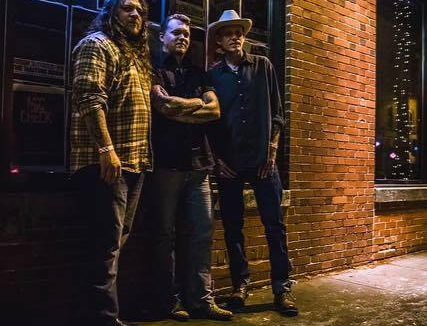 Larry Dunn (also know as Lash LaRue) is best recognized as the former leader of The Mercurys, an Omaha staple for 15 years.

Dunn’s shredding rockabilly guitar style and commanding onstage presence have made him an Omaha favorite and the go-to guitarist for performers such as Bo Diddley and Dallas Wayne while touring through the region.

After over 30 years of playing live, this is Dunn’s long-awaited first studio record with original material.

The 7 song EP, recorded over the course of one long weekend at Old School Studio in Auburn, IA, includes original songs by Dunn, a medley of traditional spirituals in Dunn’s unique style, one song written by bassist Daniel Burns, a John Prine cover, and a haunting lullaby written for Dunn’s daughter by his friend Dustin Clayton. This record takes the listener through the gamut of Dunn’s musical and emotional range.

The Hired Guns are also long-time veterans of the local music scene. Bassist Danny Burns is the vocalist and guitarist for Vago, and drummer Lee Gambrel also drums for both Vago and The Electroliners.