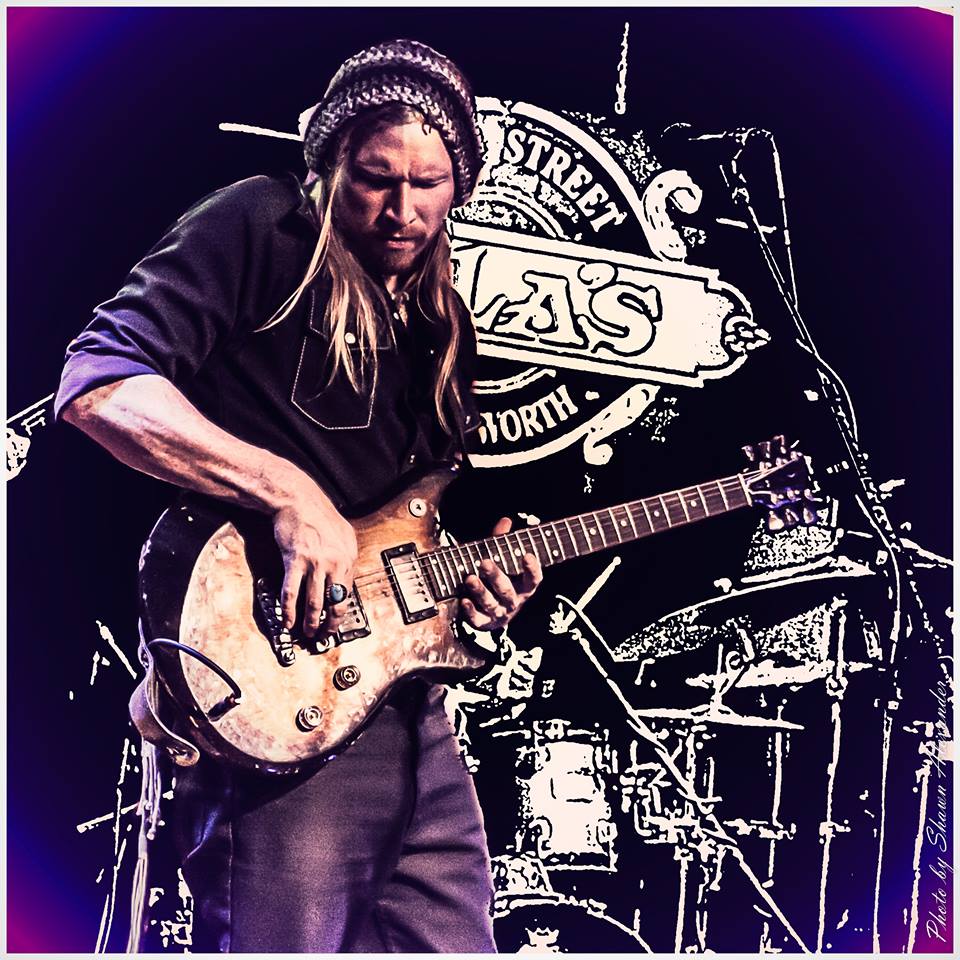 For well over a decade The Kris Lager Band has been a vehicle for Kris Lager’s unique brand of original music. Self described as ‘Heavy Soul & Boogie Trance’ KLB doesn’t fall neatly into any one category or genre. The best way to categorize them would be ‘Feel Good Music’ because as soon as it hits you, you just feel good! Whether it is a funky soulful number, a groovy beat, a boogie guitar driven riff, or a tug on your heart strings ballad. A KLB song or show has that ability to just lift you up and make you feel good EVERYTIME!!

A KLB show is a legitimate Rock ‘n’ Roll Revival and an Electric Church. The energy this band throws out from the drop of the first note creates a feel good dancing, singing, and hollering great time. One that is truly contagious and impossible to sit still through. Kris Lager is one of the most dynamic front men you’ll ever witness with an unrivaled level of intensity and showmanship. He delivers raw, and powerful music through his emotional guitar playing and singing.

This brand of ‘Feel Good Music’ all begins with intentions. “I began playing music and writing music purely as a means of expression.” says Kris. “Put me in a crowded room and I wouldn’t say two words, but if you gave me a guitar and a microphone you would have to kick me off of the stage. I found music to be a wonderful safe haven in which I could exist and escape to whenever I desired. As I matured and grew I realized just how much joy could come from communicating with your bandmates and entertaining people, all the while expressing myself at the same time.”

As soon as Kris hits the stage you get the feeling you are witnessing a man on a mission. “I hit the stage with one intention and that is lifting up spirits. I believe the way to do that is through awareness of myself and others. It is something I call ‘The Holy Trinity of music’. There is me, the musician, and then my bandmates (or the people I am creating the music with), and then there is the audience. When I am in constant awareness of all three elements that is when the real magic happens. That is what I strive for as a performer, musician, and songwriter.”

A NEW RECORD: RISE AND SHINE
The Kris Lager Band has just released a new self produced recording titled ‘Rise and Shine’. It was recorded at their home studio in LaVista, Nebraska (Studio Blue). Mixed by Chistopher Steffens at StudioPH and mastered by Doug Van Sloun at Focus Studios. “We basically took a lot of the things we had learned from working with all of our friends: Tab Benoit, Kelly Finnigan & Ian McDonald (Monophonics), Sergio Rios (Orgone), Luke Kellison (Sadson Studios), Charlie Johnson & Tim Kechley (Fuse) and a host of others. We decided it was time to take what we had learned and record our own record.” Says Kris. “Jeremiah Weir, our longtime keyboardist engineered most of the sessions and produced a lot of the record. He has been honing his skills for years and I am excited for all of our friends and fans to hear what he has captured. It is a great representation of how we sound at this moment in time and it definitely represents what we are all about as a band.”

The album features some live staples and feel good KLB anthems such as “I Got Love’, ‘The Shimmy’, ‘Rise Up’, ‘Hot Damn’, and ‘Ain’t That Just The Way it Goes’. The recording also features Some Groove oriented Bluesy numbers you have come to expect from KLB in ‘Shake it On Down’ and ‘Please Don’t Break Me Down’. In true KLB form the flavors and genres vary greatly with a Van Morrison inspired track in ‘Groove Slow’. A Bob Marley inspired song with ‘Ain’t Got No Worries’. A zydeco song dedicated to Kris’ recently departed father called ‘Standing Right in Your Lovelight’.

There’s also plenty of soulful and heartfelt numbers on this record as well. The crowd favorite ‘Love Can Get You By’. The Taj Mahal inspired ‘And You Know That’s True’ written for Kris’ wife and family. The self reflective tune of deciding to live out your dreams and turn off your television in ‘Bob Dylan’.
Kris shows his Nebraska roots in ‘Knee High by The 4th of July’ which represents the changes we go through in life. Kris describes, “As the world turns reality changes and our perception of reality also changes. The saying Knee High by The 4th of July originates from corn farmers. Not too long ago if your corn was knee high by the 4th you had a good crop, but now a days the corn is head high by the 4th of July. One of my favorite lines in the song is: “I spent years and years just strugglin’/ Ruining my good health/ But now I know if I can’t get along I’m just fighting with myself.” It’s so true, yet I still forget this almost daily. That is why I sing it; to remind myself.”

There are also some great guest appearances on ‘Rise and Shine’. Most notably vocalist extraordinaire and Omaha living legend Brad Cordle. He sings the lead on his original song “Aim it at The Milkyway”. “As soon as we laid down the track we all wanted it to go on our next record. Brad is one of my all time favorite singers. His is so soulful, and expressive. The lyrics and delivery of this song knocks me out. Jeremiah Weir’s production on this one is fantastic as well.” adds Kris.

Other guests on the record are Mama Lenny from Mama Lenny & The Remedy fame and Omaha’s own fantastic young diva Haley Marie. Together they deliver some great background vocals on a good portion of these songs.

That is just scratching the surface of all of the nuances and ingredients that went into this record and whats behind KLB. Please download or pick up the CD and help keep these troubadours on the road. There are also plenty of music in KLB’s back catalogue to dig into, and definitely go see KLB whenever they come to your neck of the woods. They will change your life!