John Primer and the Real Deal Blues Band @ The Strut

HomeJohn Primer and the Real Deal Blues Band @ The Strut

John Primer and the Real Deal Blues Band @ The Strut 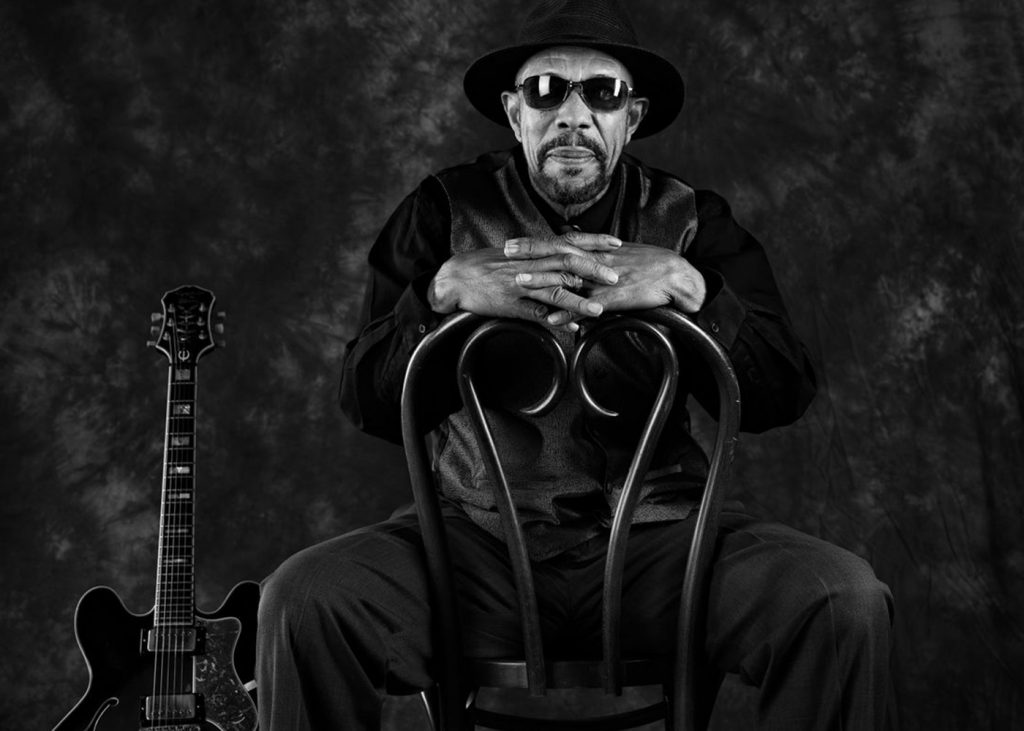 John Primer has undisputedly helped build the sound and style of Chicago blues as we know it today. The echos of tradition bellowing from the birthplaces he played such as: Maxwell Street, Theresa’s, Checkerboard and Rosa’s Lounges, pulse from every chord in his fingers today. John Primer is a Chicago Blues Living Legend.

Growing up on Mississippi sharecropper land in 1945, inspired by his family’s hard work and field songs daily, deep devotion to spirituals on Sundays, and blues on Saturdays! John dreamed of one day playing with the Legendary Muddy Waters!

Moving to Chicago in 1963, he started on that path of becoming a great bluesman, getting his first steady gig at the legendary Maxwell Street in Chicago on Sunday’s and at the famous Theresa’s Lounge seven nights a week for seven years! John was taught by the founding fathers of the blues! Starting out with his own band the Maintainers with Pat Rushing on Maxwell Street, he then moved on to play with the legendary Sammy Lawhorn and Junior Wells at Theresa’s Lounge. He worked hard and impressed Willie Dixon enough to go on tour with him and his Chicago Blues All-Stars Band. At this point he was known and John’s dream finally came true in 1981 when he got to play with his idol, Muddy Waters! Muddy called for him to lead his band and changed his life forever. After Muddy’s untimely death, he joined up with Magic Slim & The Teardrops for the next 14 years, traveling all over the world.

John paid his dues and in 1995 he began leading his own band, The Real Deal Blues Band. He has been recorded more than 87 albums with 17 albums in his own name. He has written and produced more than 55 songs on more than 6 record labels including his own, Blues House Productions. Earning 2 Grammy Award nominations, given 2 Lifetime Achievement Awards, inducted into the Chicago Blues Hall of Fame, awarded the “Muddy Award” for being a traditional blues icon, winning a Blues Music Award, Blues Blast Awards and countless other awards, John Primer is a legendary Chicago Blues Icon!

EARLY YEARS
Because he was born in Mississippi on sharecropper land John has blues running in his veins and is called “The Real Deal”. His upbringing was hard. He lived in a shack on sharecropper land on the Mansell Plantation with his entire family. He shared a bed with his cousins where you could look through the cracks in the ceiling and see the moon and stars. They had no running water just a well they shared a mile away. They didn’t have a furnace they used wood to heat their stove and cook. Sometimes they had an outhouse when they could afford to have one dug. John was raised by his grandmother and his aunties. They struggled to survive. Putting food on the table meant the entire family had to work in the field. Going to school wasn’t an option at times. You needed to have the right clothes and shoes on your feet in order to go. Other times the family needed you to plow the field or pick cotton. But for all their struggles and all their hard work, John and his family had a lot of love for each other and good times too. They sang together as they worked in the field. This was John’s first experience singing, although his mother would say “he never cried, he came out singing”. When John was four years old his father died in a tragic truck accident. His father was only 22 years old at the time and loved by the community. This was devastating to their family. John’s dad introduced blues to him as a baby when he and his cousin would play blues guitar and sing at night after work. A few years later his mother moved to Chicago to find a better job for herself leaving John and his sister Barbara with her family in Mississippi. She promised to bring them to Chicago when they were 18 years old and to visit them whenever she could. This left John feeling very sad and alone. He would go and hide in the woods and cry after his mom would leave. His loneliness lead him to the blues. His singing and playing guitar relieved his sadness and gave him a dream to follow. He didn’t have the money for a guitar so he made a diddley bow on the side of his grandmother’s house made out of a broom wire, two nails and a brick to make it tight. He would sneak and play it when he could, getting a whipping for not working. When they went to church he would sing his heart out dreaming of one day becoming a star and when he was able to go to school he would sing on the playground for quarters or dimes. At this time his grandmother had a record player and a few records. After working all day he would sit on the floor and play his grandmother’s blues records and listen to Jimmy Reed, Muddy Waters, Little Milton, Elmore James, BB and Albert King, John was instantly hooked. When his grandmother got the Sears Catalog he would sit on the floor and star at the guitar page dreaming of playing with Muddy Waters on stage. Little did he know that one day this dream would come true!

CAREER
At the age of eighteen, John’s mother came and got him as promised. He finally got out of there and migrated to Chicago in the fall of 1963. He quickly found work at the legendary Maxwell Street with Pat Rushing and the Maintainers Band in an era when Chicago’s modern electric blues sounds were first taking shape. Forming his first band, The Maintainers in 1964, John and his old Harmony guitar rocked such west-side clubs as, The Place, The Bow Tie, and Lover’s Lounge. By 1968 John left The Maintainers when the opportunity arose to front the soul and R&B group, The Brotherhood Band. Performing late into the night and working by day, John was forming his own unique style and expanding his repertoire. John’s success would lead him in 1974 to replace John Watkins in the house band at the world famous Theresa’s Lounge on the south-side of Chicago. This was the second home for all the Mississippi musicians. Playing 7 nights a week for 7 years, John performed with such originators as Sammy Lawhorn, Junior Wells, James Cotton, Buddy Guy, Magic Slim and more, all innovators sculpting the sound of Chicago Blues 7 nights a week!

It was during this point in John’s career that quite a few people were taking note of this outstanding performer. In 1978-79, master songwriter and bassist Willie Dixon invited him to join his band The Chicago All Stars. Traveling through the US, Mexico and Europe, John developed his skills as a rhythm guitarist, a powerful singer, and songwriter. Then in 1980 John’s dreams came true when Muddy Waters recruited John not only as a guitarist, but also as an opening act and bandleader. He couldn’t believe that his dream came true! He was performing with his idol on stage all over the world! Muddy served as a father figure to John, teaching him how to be a great bandleader, how to play slide guitar, and instilling in him the importance of keeping the blues true and traditional and to keep it alive for the next generation. John stayed loyal to Muddy until his untimely death in 1983.

After Muddy passed he toured with the Muddy Waters Band until John signed on with the legendary Magic Slim in 1983. For the next 13 years, he toured with Magic Slim & The Teardrops. John opened up the show with his own songs and sound. John originated the “Chicago lump” sound with Slim’s bassist and brother Nick Holt. While John was the bandleader of Magic Slim & The Teardrops, they won the W.C. Handy Award a few times for “Best Blues Band” and are still thought of as not only one of the best blues bands but also the inventors of the “Chicago lump” sound today. Together they took blues to places in the world that had never heard of it before, like Brazil.

In the early 1980’s John began playing at Buddy Guy’s legendary Checkerboard Lounge on the south- side of Chicago. He was the house bandleader, holding open jam nights and teaching the next generation how to play the blues until the original nightclub closed its doors in 2001.

But John’s days as a sideman were numbered, and in 1995 the veteran blues man released his first major label debut “The Real Deal”, on Atlantic/Code Blue Records. This recording gave John the momentum and courage to go out on his own and form The Real Deal Blues Band. Not only has John toured all over America with his Real Deal Blues Band, but also Europe, Japan and South America. Some places that have never heard blues before. John has been recorded on more than 87 albums of which 17 albums are under his own name. He has written and produced more than 55 songs. John has recorded with Atlantic Records, Telarc Records, Blind Pig Records, Earwig Records, Wolf Records, Raisin Music, Delta Grove Records and VizzTone as well as his own record label, Blues House Productions (formed in 2008). John’s albums have been nominated by the Recording Academy and the National Blues Foundation. They have won three Blues Blast Awards, two Living Blues Awards as well numerous yearly nominations.