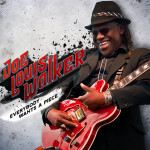 Walker is among the greatest bluesmen of his generation. He is known worldwide as one of the genre’s top musical trailblazers — a mesmerizing guitarist and soul-testifying vocalist. On his dynamic new CD, Walker’s music is equal parts rock ‘n’ roll fire and blistering, passionate blues. He has garnered four Blues Music Awards (and has been nominated a whopping 52 times) and holds an international reputation as one of the blues’ most prolific and talented stars.

In 2013 The Blues Foundation inducted Walker into The Blues Hall Of Fame.