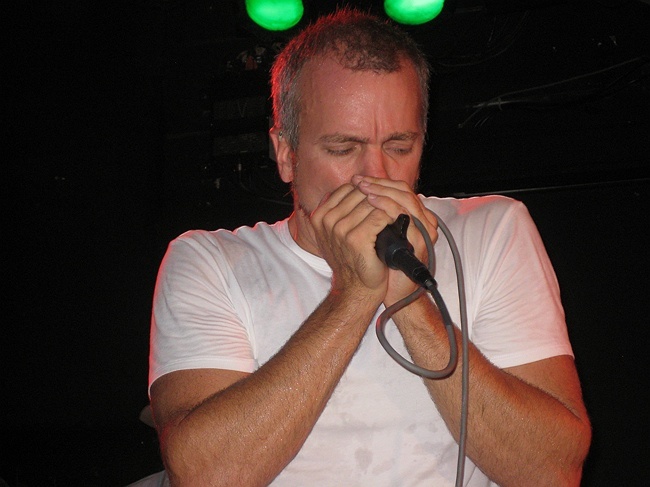 From the days of playing greasy local juke joints to headlining major festivals, JJ Grey remains an unfettered, blissful performer, singing with a blue-collared spirit over the bone-deep grooves of his compositions. His presence before an audience is something startling and immediate, at times a funk rave-up, other times a sort of mass-absolution for the mortal weaknesses that make him and his audience human. When you see JJ Grey and his band Mofro live—and you truly, absolutely must—the man is fearless.

Onstage, Grey delivers his songs with compassion and a relentless honesty, but perhaps not until Ol’ Glory has a studio record captured the fierceness and intimacy that defines a Grey live performance. “I wanted that crucial lived-in feel,” Grey says of Ol’ Glory, and here he hits his mark. On the new album, Grey and his current Mofro lineup offer grace and groove in equal measure, with an easygoing quality to the production that makes those beautiful muscular drum-breaks sound as though the band has set up in your living room.
PARKER MILLSAP
Website

Twitter
Parker Millsap didn’t know not to sing like this. Listening to old albums as a kid alone in his room, he didn’t realize howling like a Delta blues ghost readying the world for rock-and-roll isn’t a how skinny white boy from Purcell, Oklahoma usually sounds.

“I was listening to records from the 20s and 40s, and the voices that came out were otherworldly,” Millsap says. “I was really attracted to that. At the same time, I grew up doing congregational singing in church––you know, everybody stands up, grabs a hymnal, turns to number 162, and sings ‘I’ll Fly Away’ at the top of their lungs. I learned to sing in that context, where nobody’s listening to you. We are all just singing.”

People not listening to Millsap could only last so long––not just because the arresting power of his voice cuts through any crowd, but also because the 22 year-old is always reaching for something worth saying.

New album The Very Last Day (Okrahoma Records/Thirty Tigers) proves an ideal vehicle for Millsap’s message, delivered via gospel-tinged rock-and-roll poetry. In the midst of a world so fond of condemnation as entertainment, Millsap offers open-armed love of people and their stories. Whether he’s singing from the perspective of a young gay man longing for his evangelical father’s acceptance, or as the King of the Underworld wild with passion, his character-driven songs mine deep wells of joy and despair to create gut-punching narratives that are sometimes hellish, sometimes heavenly, and always human.

The Very Last Day is the anticipated follow-up to his 2014 eponymous record, which netted him high- profile praise from NPR, the Wall Street Journal, USA Today, and others, as well as a nomination for Americana Emerging Artist of the Year. Millsap is young, but he isn’t green. He has been playing in bands since junior high and recording since he was 16. “For a long time, we’d go play gigs around Oklahoma and Texas, and there was not a lot of press,” Millsap says, reflecting on recent accolades. “I just thought, ‘I like doing this more than I like working construction.'” He laughs and pauses. “When people started noticing, there was this new, weird pressure.”

Millsap responded to the pressure by assembling a cast of new and old friends and heading to the studio. “We got to go make a record that I didn’t think I’d ever have the opportunity to make,” he says, before adding with characteristic sincerity, “I got to make a really cool album with my friends. And I’m grateful.”

Produced by Gary Paczosa (Alison Krauss, Dixie Chicks, Dolly Parton) and Millsap, and engineered/mixed by Paczosa and Shani Gandhi, The Very Last Day was recorded at Dockside Studio in Maurice, Louisiana. Millsap recently moved to Nashville from Guthrie, Oklahoma, but while recording, he lived at the Louisiana studio with musicians including fiddle player Daniel Foulks, drummer Paddy Ryan, and bassist Mike Rose, the latter of whom has been his best friend and bandmate since middle school.

Millsap wrote all but one of the eleven songs on The Very Last Day. The album demands serious solitary listening even as it begs to be the soundtrack for a weekend roadtrip with friends, and clearly delights in having it both ways. The trio of devilish fiddle, poignant acoustic guitar, and thundering upright bass that originally won audiences over is now joined by a chorus of instruments including percussion, piano, and Millsap himself on growling electric guitar that until this record, he’d only dreamed of incorporating. And of course, Millsap’s haunting voice is on magnificent display: it’s wickedly guttural but can turn on a dime to hypnotically soothe listeners like a songbird.

“Hades Pleads” kicks off the album with heart-racing aplomb. Millsap swoons and pants as he channels the devil in love, inspired by Greek mythology’s Hades and Persephone. A long black train roars through the track, as Millsap puts Death on a different sort of prowl. “Hands Up” is a foot- stomper that tells the story of a convenience store hold-up from the point of view of the robber, before, as Millsap says, “they put a picture of him on the TV as people try to find him because he’s now officially a bad guy. I don’t think he’s all bad.” The smoldering “A Little Fire” mulls over the paradoxical destruction and hope in different kinds of blazes, while “Wherever You Are” hawks the freedom of being you, even in narrow-minded places. “You Gotta Move,” the only song on the record Millsap didn’t write, is a blues-soaked vocal showcase.

The religious imagery and characters so stirring in Millsap’s attention-grabbing last release are here as well, although Millsap does not consider himself religious these days. But like many artists in any medium, Millsap often uses spiritual teachings, imagery and traditions to explore what is quintessentially human. He uses the approach with sublime effectiveness in “Heaven Sent,” a beautiful standout on an album rich in transcendent moments. The song’s tortured young gay protagonist asks his Christian father question after question about the limits of his and Jesus’s love. “You say that it’s a sin, but it’s how I’ve always been / Did you love me when he was just my friend?” Millsap cries, pleading but defiant. He typically writes his songs in the first-person perspective. The result is always intimate, but in “Heaven Sent,” it’s especially compelling. The song is subversive and moving without employing an ounce of hate. Add the knowledge that Millsap, a young straight man, is singing as a young gay man, and the tune also carries a real-life dimension of empathy and solidarity.

The title track starts with a nod to the Louvin Brothers before heralding nuclear apocalypse. It’s another example of Millsap’s penchant for using folkloric music and stories as the framework for modern observations. In “The Very Last Day,” Millsap’s narrator takes the day of reckoning out of God’s hands and places it squarely on the shoulders of men––”Ain’t no sweet chariot is gonna come for to carry everybody home / No instead, it’s gonna be a bomb. And here it comes!” Sauntering and darkly euphoric, it’s Millsap’s favorite of the new tunes to perform live.

“I was living in Guthrie when I wrote a lot of these songs,” Millsap explains. “Oklahoma in the winter looks post-apocalyptic. We don’t have a lot of evergreen trees, and the grass turns brown to the point of colorlessness. Everything just looks like skeletons and grayness.” He was also reading Stephen King’s The Stand and Cormac McCarthy’s The Road while binge watching The Walking Dead. “Some people just want to watch the world burn,” Millsap says. “A lot of the songs I grew up singing in church are about the end of the world, so it wasn’t uncomfortable for me to go there. It’s fun.”

“Tribulation Hymn” closes the album as an unforgettable picture of isolation and regret. The Day of Judgment has come and gone, and Millsap’s protagonist has been left behind. He leaves listeners with the image of a chorus of crows, singing in the rafters above the narrator in an empty church.

As Millsap sings his stories about lonesomeness and longing, the supernatural and the ordinary, even the saddest portraits become loving odes to everyday humanity. “I’ve learned to trust people before I’ve learned to distrust them, which can be dangerous,” he says. “But yeah. I do like people. I think you have to. What else are you going to like?”