Jimmy D. Lane with Sebastian Lane Band & Us & Them at Chrome

HomeJimmy D. Lane with Sebastian Lane Band & Us & Them at Chrome

Jimmy D. Lane with Sebastian Lane Band & Us & Them at Chrome 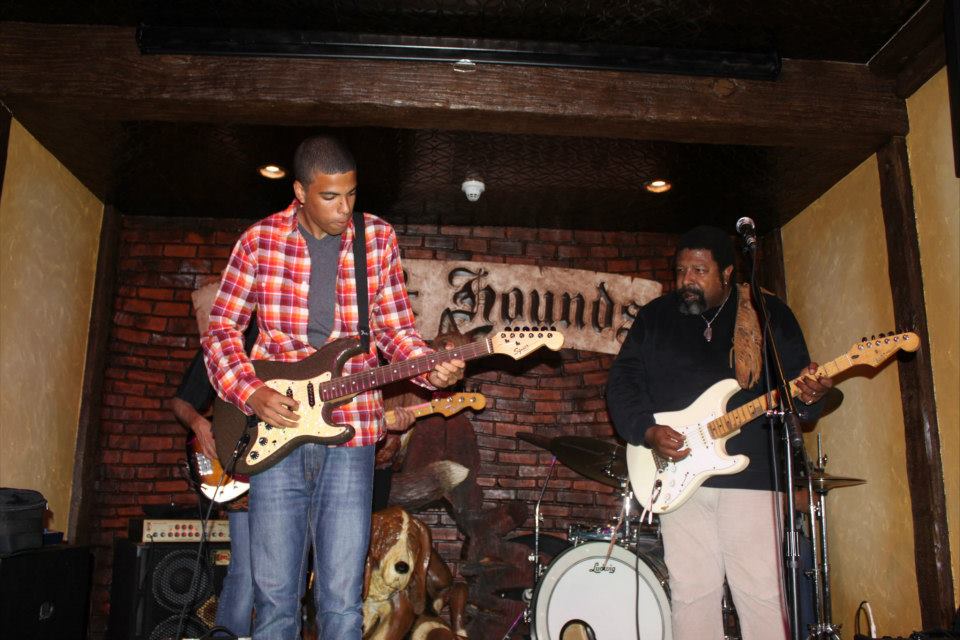 Lane was born to the Chess blues musician Jimmy Rogers and his wife Dorothy. In his childhood, he got to know many older bluesmen who worked with his father, including Muddy Waters, Howlin’ Wolf, Willie Mabon, Little Walter and Albert King. In 1998, Lane played for the then President Bill Clinton.

He made his solo recording debut in 1995. The self-titled disc on Blue Seal Records featured 12 originals and one of his father’s tunes. In 1993, during the sessions for Bluebird for Analogue Productions, with the Jimmy Rogers Band, he met the record producer John Koenig and head of Acoustic Sounds, Chad Kassem. Koenig saw the Jimmy D. Lane band at B. B. King’s Club in Universal City. Koenig and Kassem got together and Lane recorded Long Gone for Analogue Productions in 1995, at Ocean Way Studios in Los Angeles.

His second album, Long Gone was released in 1997. Lane played on and co-produced Hubert Sumlin’s I Know You, also on Analogue Productions.

One of his favorite phrases “It’s all good”, was originally the title of his third release, but changed it to Legacy in honor of his father’s memory. It was released in May 1998, and featured guest appearances of Sam Lay on drums, Carey Bell on harp and Hubert Sumlin on guitar. It also featured the last recordings of Jimmy Rogers, who played on “One Room Country Shack” and “Another Mule Kickin’ In My Stall.”

In 2008, Lane’s song “Tears Without A Shoulder” was featured in an episode of In Plain Sight (“The Trojan Horst”). In July 2012, Lane made a national Canadian television appearance on Global BC Morning News. He was commissioned by Tourism Burnaby, British Columbia to host an on line Twitter video show, “Tweet The Blues”, to help promote the 2012 Burnaby Blues Festival. He has been included on his father’s, Mississippi Blues Trail Historical Landmark in Ruleville, Mississippi. Lane performed two songs on the Experience Hendrix Live at The Paramount Theatre DVD, released in 2008. He performed with Mike McCready, Double Trouble and Hubert Sumlin, on the project.

In April 2013, Lane was inducted into the Chicago Blues Hall Of Fame.

Sebastian Lane is a fierce young guitarist whose roots dig deep into music history. He is the grandson of Blues Hall of Fame legend, Jimmy Rogers, who gained prominence as the guitarist for Muddy Waters before starting his independent career with Chess Records. Sebastian’s father is blues-rock hall of fame artist Jimmy D. Lane, who has played with the likes of Eric Clapton, Mick Jagger, Jim Keltner, Keith Richards, B.B. King, Van Morrison, Jonny Lang, Gary Moore, Double Trouble, Taj Mahal, Stephen Stills, Jeff Healey, Lowell Fulson, and Snooky Pryor, Kim Wilson, Pinetop Perkins, Johnnie Johnson, Kim Wilson, Robert Plant, Jimmy Page, David ‘HoneyBoy’ Edwards, Little Hatch, Willie Kent, Henry Gray, Lazy Lester, and of course his father, Jimmy Rogers; just to name a few. But, the truly fascinating thing about Sebastian Lane is that music is actually just his side hobby. His day job is balancing a future career in medicine. He is currently a medical student at The University of Nebraska Medical Center and will graduate with his M.D. in 2019.

Sebastian has played for several different artists throughout his career before deciding to focus on his own music where he now plays with the Sebastian Lane Band. This group is a modern age blues-rock group with the goal of keeping fun live music around and exposing the genre to their peers while playing music that every generation can appreciate.The group features Ben Curran on lead and rhythm guitar, Dain Armbrust on Bass, and Kevin Fries on drums. All of these musicians made their start through the Omaha Blues Society and their program called Blues Ed. Ben currently studies guitar and was accepted into Berklee College of music. Both Dain and Kevin have made a name for themselves playing for several different Omaha and Lincoln based blues bands over the years.

Sebastian released their debut album in July of 2018 which was entitled “Walkin’ By Myself” in tribute to his Grandfather and released on his father’s birthday. The album has gone on to sell and stream over a quarter million plays across all major platforms and has garnered them the attention from several major record labels. The album features blues/rock superstar Eric Gales, and fellow up and coming young guitarist, Christone “Kingfish” Ingram. Sebastian has recently been nominated as “Artist of the Year” and “Best Blues Artist” at the 2018 OEAA awards.

Us and Them Blues Band – BluesEd Representatives

Us and Them Blues Band was selected to perform at the 2017 International Blues Challenge Youth Showcase in Memphis as a part of the Blues Society of Omaha’s BluesEd program. The 10 members of Us and Them are experienced and award winning musicians ranging in age from 11 to 17. They play an infectious show of Blues Rock emphasizing the traditional Blues values of soul, groove and improvisation.

The band is well known and popular in the Omaha metropolitan area and has performed at local festivals and venues such as Playing with Fire, Jazz on the Green, Chrome Lounge, The Ozone, and Bel Air Blues Festival, They have also played for benefits such as the Red Cross, Support the Troops, ALS Walkathon, Suicide Prevention Walk and many others.