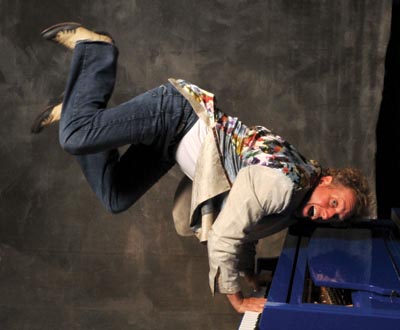 There hasn’t been raw, vintage boogie this solid since Jerry Lee lost his steam in the Seventies. -Rolling Stone Magazine

Stone Cold Second Coming of the Killer Himself. -Todd Snider

He takes the time machine back to when rock rolled on piano power.
-New York Post

Williams pounds the bejabbers out of the piano, whether he’s playing honky-tonk, a Yiddish instrumental solo or Lewis’ cover song.
-AP Associated Press

The rock ‘n’ roll history of Memphis looms large in Williams’ world. He recorded for RCA and Sun Records in the 1980s and ’90s, and returned to the recording fold in 2010 and has continued steady since.

At the age of 16, Williams left his tiny hometown of El Dorado, Ark., to perform with LaBeef who had set up a base of operations in northeast Massachusetts.

Williams, who continues to work with LaBeef on occasion, went solo in the late 1980s and found a steady home at Mallards in the Peabody Hotel in Memphis, TN when a snowstorm stranded him a few steps from the Peabody door, quickly he attracted a following and the rest, as they say, is history.

After several years, he left after signing with RCA, which released his first album, “Tore Up,” and he stayed on the road after Sun Records issued “Wild” in 1993. “Don’t Get None Onya’,” released in 2004, captured the power of his blend of honky-tonk country and Memphis rock ‘n’ roll and was the birth of his own label. “Rockin”, “Killer Instincts” and “Recycled” soon followed and the latest album is in progress now.

Williams is also no stranger to large motion pictures, movies as we call them.
Williams performed all of the hand shots for the movie “Great Balls of Fire” starring a young Dennis Quaid and was also featured in “The War Room” documenting Bill Clinton’s race for the White House. He’s also had numerous television appearances and various shows on MTV, VH1 and CMT.

A wild man onstage, Jason accredits influences like Jerry Lee Lewis, Moon Mullican, Memphis Slim and Al Jolson, for helping to develop his vast repertoire and seemingly endless energy. “I’ve always welcomed the comparisons; my influences were some of the greatest entertainers ever to be seen.” Jason continues to tour more than 160 shows a year.