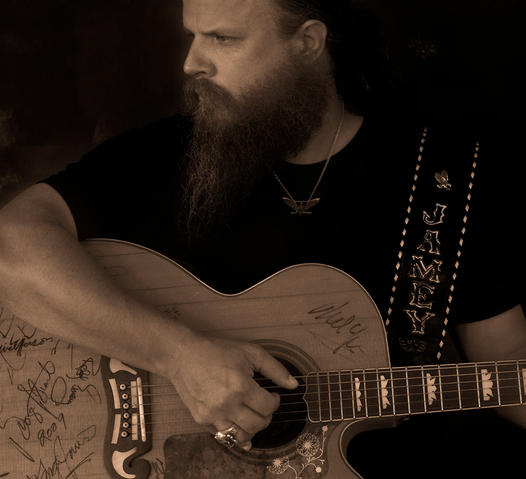 Singer/songwriter Jamey Johnson is just as comfortable mopping up the tears on the barroom floor with an old Hank Williams-style ballad as he is tearing the roof off with a honky tonk juggernaut. The Alabama native and former Marine rose to the top of the Nashville food chain through blood, sweat, and tears. Being raised in a devout and deeply musical family helped the new traditionalist find his voice, but it wasn’t until he moved to Music City that the world began to take notice. Johnson made his debut with his single “The Dollar”, the title track to his 2006 album The Dollar. In 2008 he released his second album, the gold-certified That Lonesome Song. That album produced two singles, the Top 10 hit “In Color” and “High Cost of Living”. Johnson has since released two more albums, The Guitar Song in 2010 and Living for a Song: A Tribute to Hank Cochran in 2012. In addition to most of his own material, Johnson has co-written singles for Willie Nelson and Merle Haggard, Trace Adkins, George Strait, James Otto, Joe Nichols and Jessie James Decker.

American rock band Blackberry Smoke – Made up of Charlie Starr (vocals, guitar), Paul Jackson (guitar, vocals), Richard Turner (bass, vocals), Brit Turner (drums) and Brandon Still (keyboards) – has become known for a singular sound indebted to classic rock, blues, country and folk. Since their debut in 2004, the Atlanta-based band has independently released six full-length albums and toured relentlessly, building a strong and loyal community of fans. The band has also had unparalleled success with sales of each of their last albums. In 2015 they released Holding All the Roses, which was the first independently-released record to hit #1 on the Billboard Country album charts in modern history. Like An Arrow followed in 2016, again putting them at #1. 2018 saw the band outsell all other releases with their self-produced Find A Light plus the acoustic accompaniment, The Southern Ground Sessions. Most recently, in 2019 Blackberry Smoke released Homecoming: Live in Atlanta, a recorded performance from their annual show in the band’s home town. It also debuted at #1 on Billboard’s Americana/Folk sales charts. This became the 4th consecutive album for Blackberry Smoke to be atop the charts. In addition to their success domestically, the band has also had #1 Rock, #1 Independent, and #1 U.K. Americana album chart releases in the United Kingdom and Europe.