Hector Anchondo @ The B Bar

HomeHector Anchondo @ The B Bar

Hector Anchondo @ The B Bar 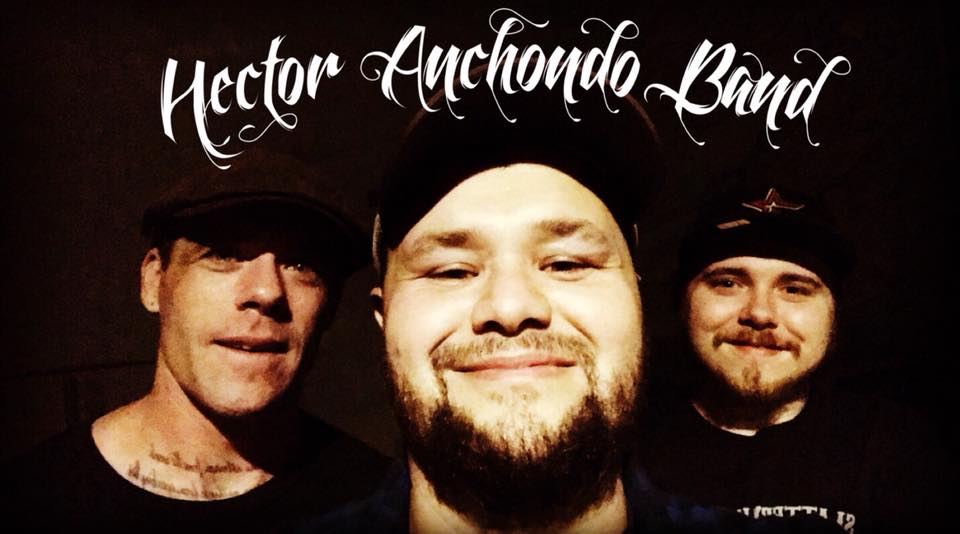 While other guys his age were going to college, getting married, buying homes, and building professional careers, Hector Anchondo was playing guitar. He lived on the road, and when he wasn’t on the road, he lived on couches. He got jobs as he needed them, but quit as soon as he could get back on tour. He put off having kids. He put off marriage. Instead, he played guitar.

His guitar playing became a thing of legend in the Omaha area, where he was based. His dazzling introduction of “Black Magic Woman” stunned audiences who thought they had heard everything. Decades of single minded devotion to his craft showed every time he played. But as much as he was beloved by thousands of fans in the Heartland, he remained largely unknown to the rest of the world.

Not anymore. With a finish in the finals at the 2016 International Blues Challenge and his masterful 2017 album Roll the Dice getting global radio play and leaping to the top of blues charts, Hector Anchondo is at long last taking his rightful place at the forefront of the contemporary blues world.

Growing up on a Missouri farm, Anchondo soaked up roots music, Latino music, bluegrass and old blues. He picked up the guitar as teen, and as soon as he finished high school, while classmates headed off to college, he headed for Omaha, where he had some family, to make a life playing guitar.

“Omaha turned out to be a great place for a new artist starting out,” Anchondo said. “They will get behind a new act with new original music.”

The young guitarist started hitting Omaha jam nights every single week, where older musicians recognized his prodigious talent and took him under their wings. Within only a couple years, he had a hot original Latin and reggae band and a song on local radio. Anchondo toured with that band almost non-stop for the next 10 years.

“It was a lot of sleeping on floors, or in the van, or just driving on through to the next show,” he said.

When the recession of 2008 happened, work dried up in the music scene, and the stress took its toll on the band, which parted company. Anchondo found himself without a band, working as a dishwasher in a Cuban restaurant. That year that tested his resolve more than any other.

“I was kind of floundering personally,” said Anchondo. “I was like, ‘what do I do?’ I had put all my eggs in that basket, into music.”

Anchondo knew his mind, though. It was guitar or nothing. And, he realized, this could be the moment he finally got to do a thing he’d wanted to do all his life. He had loved the blues since he was kid, had been sneaking in blues songs at his concerts for years. He wanted to play blues full time. So he started looking for other musicians who could help him make the hard-partying kind of blues he’d always loved.

When you put your mind to doing the thing you were born to do, the universe helps. Anchondo got an unexpected call from an old friend in St. Louis. He’d been a fan of Anchondo’s Latin music, but he had always loved those blues songs Anchondo snuck in even more.

“He had his own little record label, he was like, ‘I have this crazy idea, tell me what you think. I want to help you put out a Hector Anchondo blues album,’” the guitarist said. “I said, ‘Hell, yeah. Let’s do it.”

Anchondo wrote 30 songs that summer, narrowed it to five, and put out an EP called Kicking Up Dust. The album did well; he did Young Guns two years later. Omaha embraced Anchondo’s new direction and his tight, powerful band and sent them to the International Blues Challenge twice. In 2015 they made the semi-finals; in 2016 they made the final nine.

“It felt like we won,” said Anchondo. “it was cool the amount of hype we had that whole week.”

The band started sharing stages with the biggest names in blues, including Coco Montoya, Magic Slim and the Royal Southern Brotherhood. When he went into the studio to make his most recent album, Amanda Fish joined him for what would be the opening track.

The album, Roll the Dice, was the best thing Anchondo had ever done. It was saturated with his history of blues, with flavors of Latin, rockabilly and Americana. It showcased the flawless, fluid and brilliant style that he earned in 20 years of love and discipline. There was buzz around his band, he knew. He was on the verge of breaking onto the national scene. He wanted to release the album and make it count, but he wasn’t sure how to go about it.

Then a guy at a booking agency suggested he see if KBA-winning blues publicist Frank Roszak would accept him as a client. Roszak was delighted. With the help of the high-powered publicist, in April Anchondo’s released Roll the Dice worldwide. The results were nearly overwhelming. The album leaped to the top of blues charts, including the top 25 on the Living Blues chart, and has spent many weeks on the Roots Music Report blues and blues rock charts. Critics fell over themselves to heap the album with praise, calling it “fabulous”, “inventive”, “magnificent”, and “absolutely beautiful.”

“Anchondo’s spectacular guitar playing and suave vocal stylings stand out front in his newest release, Roll the Dice,” said one Philadelphia critic. “Immersed in blues and Americana, this ten song album is a wonderful delight.” Making a Scene said, “Anchondo’s fluid guitar notes and vocal clarity are a pleasure.”

The Omaha veteran is finally realizing dreams a lifetime in the making. And not all of them are musical.

“I put off having a family, having a child, and each year that went by, my thoughts became more powerful about having a child,” he said. “But I was dedicated to the craft, and I put all my efforts there. I watched other people having babies, thinking I’ll be one of the ones who doesn’t. Then I ended up meeting a really wonderful girl, and we ended up having our son.”

Now his family travels with him as he tours.

Already another album is in the works, and Anchondo is expanding his tour base. Soon audiences all over the world will get a chance to experience what Omaha fans have loved for so long; the smooth smoky voice that can make you smile even as tears fill your eyes, the audacious grooves of his powerful band, and the lyrical mastery of Anchondo’s guitar, telling the story of a life lived for the love of music.

Put this in the “If you haven’t yet, you really should” category; join us at The Revue Lounge…Hector Anchondo has been rippin’ the place up.
-Rick Galusha of award nominated Pacific Street Blues Show on KWIR 89.7 The River

Blues Challenge:  The band receiving the most points at Round Two of the Blues Society of Omaha’s Nebraska Blues Challenge April 7 was Hector Anchondo Band. The final round is April 21 at McKenna’s. The April 21 winner will join Anchondo and Josh Hoyer & The Shadowboxers in the finals May 19, 5 p.m., at The 21st Saloon. –BJ Huchtemann of The Reader

His slide guitar is impeccable and voice, well for a 30-something, it’s mature for a blues singer –Kyle Eustice of The Reader