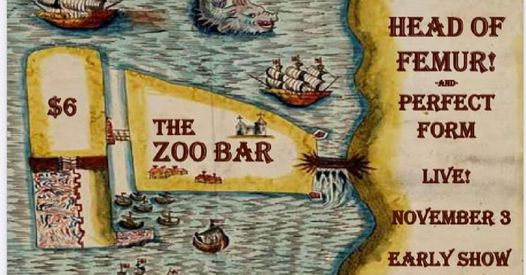 Head of Femur is an American Chicago-based band, formed in November 2001 by Nebraska natives Mike Elsener, Ben Armstrong and Matt Focht. After many members moved back to their home state of Nebraska in 2013, they were approached by Mike Semrad, owner of Sower Records, in early 2016 wanting to release a new record. Members had been working with Matt Focht, via the internet, working out tunes and being creative. After numerous sessions in Lincoln at Circle M Studios, ‘Hear! Hear! Tunemaker’ was finally completed in the Fall of 2016.

Twenty years after their first release, Head of Femur continues creating willfully weird maximalist pop music, “a musical equivalent of what Dorothy might have felt like when first stepping out of her house into Oz” (Pitchfork). Head of Femur signed with SpinART records in 2003, touring the country with the likes of Wilco, Deerhoof, Andrew Bird, and Bright Eyes, even taking the stage as the first band ever to play the celebrated Pitchfork music festival.