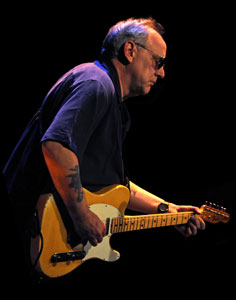 Whether Jimmy Thackery headlines a festival in South Dakota or jams for hours in one of numerous blues bars that dot the musical landscape, he’ll always unleash an intense volley of rockin’ blues guitar guaranteed to leave crowds emotionally spent. His double edged guitar dynamics allow him to fire off tracer missiles, bend a note so it will fit under a limbo bar, run off dive bomber riffs, and find space within the trembling of one stinging note. “I put all my senses on hold and find the zone and follow what’s inside. There’s an electricity from your mind to your heart to your fingers. You just try and remember to breathe.”

He’s one of the few blues guitarists who learned first hand from the masters of the blues, not off a blues record or DVD. Though most associate Jimmy with his 15 years as the co-founder of the Nighthawks, he ended his time with them in 1987. Since then, Jimmy has been on the road as a solo musician for 15 years doing nearly 300 shows a year proving each night that he is still the guitar powerhouse in the blues.

Thackery has lived the life of a true road warrior; he’s absorbed the artistic lessons of life and filtered them into his guitar playing and song writing. To get where he is today, Jimmy has journeyed a highway of life filled with a series of twists and turns. He met all the right people and they have had a permanent influence on him.

It was Thackery’s time on stage with Muddy Waters that is branded deep within his musical soul. “Muddy was one of those guys who was constantly encouraging. He never told you what to do, but he always told you what you were doing wrong. He never minced words about that.
“The first time on stage with Muddy, I was in such awe of him that I just kept my eyes and ears open and just picked up on everything he did. It was the dynamics they had that became so ingrained in us. We heard it on the records and then stood on stage and saw how it worked.”

Thackery left the Nighthawks in 1987 because he wanted the opportunity to write and put newer material into the sets. First he formed a six piece R&B band, the Assassins, an all-star R&B, funk band from the DC area, and recorded three albums with them. Then, in 1992, Thackery put together his three piece band called the Drivers to highlight his explosive guitar and hit the blues highway.

“The 1990’s were a fabulous time. We were working our butts off doing” close to 300 shows a year. The irony is that was one of the reasons I’d left the Nighthawks, I was tired of working so much and not having a life outside the music. When you’re out on your own, you’d better rise to the occasion. So I found myself back in the 300 night niche. What made that satisfying is that it was my ship and I was the captain of it. We were doing material that I was writing. We were doing arrangements that I came up with.” Whenever Thackery plays live, a guitar stand props up four guitars and Thackery will announce to the audience, I’m gonna use all of them tonight!”

His recordings are no different. In that time, he’s recorded eight discs for Blind Pig.

His first record, Empty Arms Motel, was released in 1992. “That one still seems to be the favorite of a lot of people. I went into Kingsnake Records and rattled off some covers and originals. Halfway through, Bob Greenlee called Jerry Del Guidance at Blind Pig about the sessions.” From that session, Thackery began his years with Blind Pig.

In 1993 he followed up with Sideways In Paradise, a down home, laid back acoustic duet with John Mooney. Then, in 1994 Jimmy recorded Trouble Man, with Memphis producer Jim Gaines. That began their five record association. Wild Night Out, a 1995 live recording, Drive To Survive in 1996, Switching Gears in 1998, and Sinner Street, which added a sax to Thackery’s music in 2000. “I think that record, Trouble Man, turned the corner for me because I had a real producer and I was doing original songs. That gave me a direction. Jim and I did a lot of projects together. He did everything through Sinner Street. I was learning so much by watching him as a producer that by the end of Sinner Street, we both came to the realization that I was ready. I was telling him what was going on. He knew that I’d lost my training wheels.”

After leaving Blind Pig, Thackery has released and produced two of his own records, We Got It and True Stories, on Telarc and two collaborations on Telarc with Tab Benoit, Whiskey Store and Whiskey Store Live. And there was the critically acclaimed reunion with his old friend David Raitt on Blue Rock It”

All this has lead to a new Jimmy Thackery. Because every record is more about originals than covers, Jimmy traveled to Nashville to work out his songs with some of the best. This is not a Jimmy Thackery goes country. This is Jimmy Thackery rocks the blues. “I think True Stories on Telarc is my best song writing to date. For the newest Telarc project I went to Nashville to work with Gary Nicholson. I wanted to go and see how the guys in Nashville go about writing songs. We wrote this from the ground up. I came in with hooks and ideas and lines. I didn’t want to be overly prepared. I wanted to see how they build these songs lyrically. What you do with Gary Nicholson is throw out a hook or line and take off from there and you don’t leave that garage until you’re done with a song.”

Jimmy describes what writing is like for him. “Inspiration can come at any time. It might be a lyric first or it might be a musical lick first. It might just be a form thing. In my world, a lyric tends to be a musical road map. It tends to set up the music I hear in my head. The cadence of a lyric tends to suggest the way to go on the guitar. There was one tune we labored over with a certain groove and feel and it wasn’t rising to the occasion. At the very last second, Gary and I said, “Why not just rock this thing out. We completely switched gears and totally changed the patterns and chords and went for something completely different. We did it in one take. It’s the first song on the record and it just kicks ass.”

And there is Thackery’s guitar. “There are three guitar instrumentals on this record because I wanted to make a guitar oriented record. The guitar is still very rootsy stuff that is very rooted in blues. But also rooted in surf and spy music. I’m a sucker for that straight eight beat, twangy, minor scale instrumental stuff. The first thing every body did when they got a guitar in the early 1960’s was to play the music of the Ventures. I’m still staying true to those roots. Blues is well represented, but so is all that other music I heard. But so is all the other music I listened to.”

To make the best record possible, Jimmy hired some of the best musicians Nashville had to offer. It’s no coincidence that many of these names also work with fellow blues rocker, Delbert McClinton. Jimmy notes that even though it has a Delbert feel, it still has all of his integrity. “Maybe because of the way it’s laid out and the common musicians, it will strike a chord with fans who don’t normally buy my records.”

To support his newest project, Thackery’s ready to do the road time. “I started thinking that I missed the days when I was just a full blown, kick ass trio. I thought it would be fun to go back to that. I did keep Mark Stutso, my drummer of 15 years. He knows what direction I’m going in before I do.”

Between constant road work with his own band, producing the latest record by his Arkansas friends, the Cate Brothers, recording Whiskey Store with Tab Benoit and touring in support and playing various Nighthawks reunions, Thackery’s plate is overflowing, and that’s exactly how Thackery likes life – Overflowing.

From Huntington Beach, California, Harlis Sweetwater, as a singer, guitarist, songwriter and
frontman, has shared the stage with everyone from Jimmie Vaughan, Everlast, Chris Shifflet
(Foo Fighters), ZZ Top, Los Lobos and Brian Setzer to R&B/Blues legends Etta James, James
Cotton, and Wilson Pickett to name a few.
He has been called “the best singer in any genre” by music critic Robert Kinsler of the OC Register,
While SugarBuzz Magazine had this to say: “From the heart, Harlis Sweetwater,you know
instantly the real deal is upon you. This man knows the blues.”
Harlis formed the band in 2012 to get back to the Blues/Soul music he loves. He enlisted fellow
musicians Jimmy Sena on Drums and Jason Holser playing Bass; both with extensive recording
and performing experience, to lay down a solid foundation of groove for His wild, bluesy & intense
guitar playing and broad, gravely soulful voice.
The groups chemistry makes for high energy performances that both entertain and mesmerize,
and often times the party on stage rivals the one in the audience making the Harlis Sweetwater
Band one of the more fun and enjoyable bands to see live.
The group released it’s debut album “Lights Goin’ Down” in Oct. 2012, and garnered great
reviews. Gary Schwind of the Examiner.com stated “This Album Is Brilliant” and Incognito
Magazine wrote in its review of the album “If you want some music you can feel and not just
hear, check out this band.” The album was featured in iTunes Blues “New and Noteworthy”
section, made several appearances in iTunes top 200 best selling blues albums and the song “I
Can’t Justify” charted #46 on the U.S. Blues Charts as well as their songs appearing on Blues
Charts in Ireland, Sweden and New Zealand.