Far and Wide at Ozone

HomeFar and Wide at Ozone

Far and Wide at Ozone

This will be a $1 first drink night for BSO members and a chance to support this outstanding Blues Band made up of our youth from all over the city.

Far & Wide
“Far & Wide” originally formed with 6 all-new members at the start of the 2013 season, including Bryn Groenjes (keys) and Levi Hagan (percussion).  Three new members joined the band at the start of the 2014 season, including Rebecca Erdman (lead vocals) and Griffin Gillen (bass).  The current lineup has been rounded out this year with the addition of Tyler Douglass (trumpet), Pete Fucinaro (tenor sax), Ross Grieb (guitar) and Evan Johnson (guitar).

These talented students are a mix of Middle School and High School musicians representing a “far and wide” area around the metro, ranging from Ashland to Elkhorn to Omaha to Plattsmouth. Check out the band’s Facebook, Twitter and Instagram pages (FarAndWideBlues on each) and the BluesEd website for pictures, videos and upcoming shows! 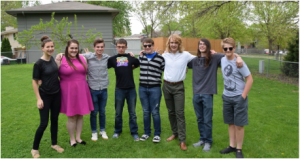