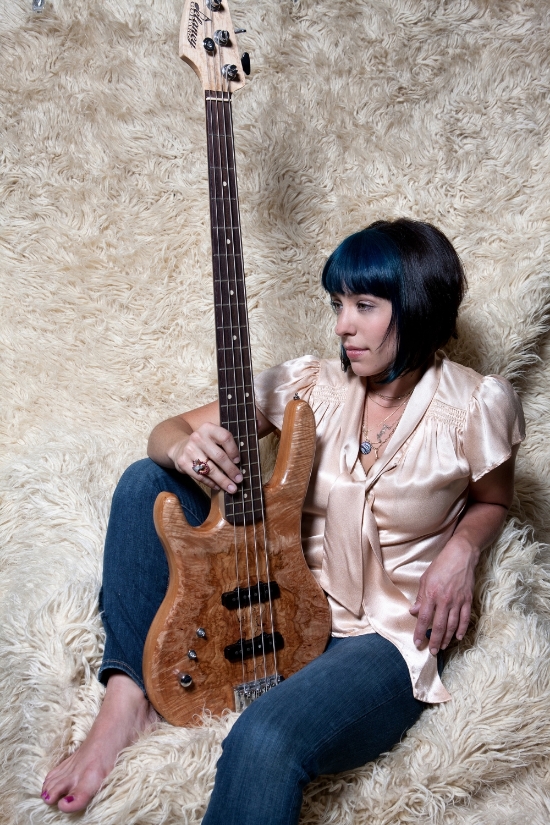 Fabulous Free Festival thanks to long-time BSO Sponsor Paul Weggener. THANKS SO MUCH PAUL!!!

Food trucks on site. Beer, wine and mixed drinks available for purchase from Thunderhead Brewing.
Chairs welcome. No outside food/beverage or coolers please.

Festival brought to you by 7 Oaks Investments in conjunction with Blues Society of Omaha and Thunderhead Brewery.

Danielle Nicole: Founding member, lead singer, and bass player of Kansas City blues-rock band Trampled Under Foot, Danielle Nicole stepped out on her own in 2015 with her debut album “Wolf Den.” In 2018, Nicole returns with a follow-up release via Concord Records.

“I grew up playing the blues, and the blues is still a big part of what I do. But now I’m reaching out more and trying different things. It still sounds like me, but I’m stretching out a lot more than I have previously.”

Nicole’s distinctive, inventive bass work—which resulted in her becoming the first woman to win the Blues Foundation’s 2014 Blues Music Award for Best Instrumentalist, Bass—is the product of years of intensive roadwork. Although she had no experience with the instrument when she became Trampled Under Foot’s bassist, now she can’t imagine life without it.

“When I started doing my solo thing,” she continues, “someone asked me if I was gonna hire a bass player. No, of course not! I originally picked up the bass to keep Trampled Under Foot a family band, but I really fell in love with it. It was a huge challenge, and it still is. But I really love being part of the groove and getting to sing on top of that. I had learned some stuff on acoustic guitar before I started playing bass, but I never really felt connected to it the way I do with the bass. It’s empowering, walking onto a stage full of grown men who can play their asses off, and it’s ‘OK, I’m gonna play this bass, we’re gonna do this, and it’s gonna rock.'”

Rounding out her band are longtime Danielle Nicole Band guitarist and multi-instrumentalist Brandon Miller, and her older brother Kris Schenebelen [Trampled Under Foot] on drums.

“I think that it’s a good time for the kind of thing I’m doing,” she states. “From my years of playing blues festivals, I’ve seen that younger and younger audiences are getting into the blues. I think that people want to hear authentic music again.”

Electric Voodoo: Elektric Voodoo is a “World Beat Rock & Roll” band from southern California that blends classic afrobeat, latin, rock & roll, psych, jazz, blues and many other influences into it’s own unique genre that tastefully straddles the line between modern and vintage.

The band started when Scott Tournet (founding member of Grace Potter & The Nocturnals) started writing new material after leaving the Nocturnals. “Musically I wanted to try something a little different than what I’d done before. I wanted to make music with an undeniable rhythmic pulse but I really didn’t want to make computer driven dance music as these past few years that seems to be much of what I hear.” To accomplish that, Tournet tapped into the rhythms of west Africa, Latin, and World music for inspiration. What came out the other side though was not just a world music project.

Tournet’s old band, The Nocturnals, had a quite a successful career which saw them write, record, and perform with The Allman Brothers, Billy Gibbons (ZZ Top), Taj Mahal, Dan Auerbach (The Black Keys), Robert Plant, Mavis Staples, Bob Weir, and many more. Through these experiences Tournet became schooled in song craft, soul, pop, blues, and classic rock & roll. So when he began writing songs to go on top of these powerful world rhythms the influences from his past shone through. What the listener is left with is a very unique sound that while immediately is very danceable, also offers innovation, song craft, and melody. Elektric Voodoo is a band that can excite and exhaust a Saturday night audience while also engaging and challenging more focused listeners.

Glide Magazine “tastes of The Flaming Lips, Santana, Fela Kuti, Tame Impala and The Arcade Fire break through atop this soulful collection of songs that are birthed with unlimited potential.”

Grateful Web- “They have, crafted a cohesive album that blurs the lines between genres and eludes classification, resulting in a sound and experience that appeals to a wide variety of audiences.”

Alistair Green: Guitarist, Singer, and Songwriter Alastair Greene has been a mainstay of the Southern California music scene for over 2 decades. Alastair was born April 18th, 1971 in Santa Barbara, CA. He discovered music through his mother’s piano playing at home and whose record collection included classics by The Beatles, Stevie Wonder, and Elton John, while his father’s tastes at the time leaned toward Bach and Beethoven. Alastair was inspired to pursue music as a career by his grandfather, the late Chico Alvarez, who played trumpet as a member of the Stan Kenton Band in the ’40s and ’50s. Growing up, Alastair took piano lessons and played the saxophone before discovering the guitar in High School. He received a scholarship to the Berklee College of Music in Boston, where he studied for two years before returning to southern California to begin playing with Blues and Rock bands in the early ‘90s.

Alastair is best known for his blues-based, soulful, and melodic guitar playing (as well as one of a rare-breed to play slide guitar), Alastair can be heard on CDs by Alan Parsons (2006 Grammy Nominated ‘A Valid Path’ and the 2013 live CD ‘Live Span’); Aynsley Dunbar (2008 SPV Records release ‘Mutiny’); Blues singer, harmonica legend, and former member of WAR, Mitch Kashmar (2005 ‘Wake Up and Worry’ on Delta Groove Records), Toad The Wet Sprocket’s front man Glen Phillips (2012 release ‘The Coyote Sessions’) as well as French Blues Guitarist Franck Golwasser’s 2007 release ‘Bluju.’ Alastair has put out 5 of his own CDs and has also appeared on countless independent CD releases ranging from Blues to Southern Rock. Alastair’s song ‘The Long Way Home’ appeared in a 2007 episode of the TNT hit TV series ‘Saving Grace’.

The Alastair Greene Band was formed in 1997 and has always played a combination of original material as well as covers. Whether with his own band or as part of others, Alastair has opened shows for The Fabulous Thunderbirds, Robin Trower, John Mayall & The Bluesbreakers, Lonnie Brooks, Chris Thomas King, Lucky Petersen, Jonny Lang, Billy Boy Arnold, Joe Bonamassa, Mike Campbell’s Dirty Knobs, and many more. Alastair continues to perform an average of 100 live dates a year with his own band as well as with the Alan Parsons Live Project, Mitch Kashmar, Franck Goldwasser, Shari Puorto and a host of other Southern California Bands. The Alastair Greene Band was the only unsigned act to play the main stage at the 2010 Sonora Blues Festival.

Alastair released the Blues CD ‘Walking In Circles’ in June 2009 and accepted an offer to be the full time guitarist in the Alan Parsons Live Project in January 2010. The Alastair Greene Band Co-Headlined the 2010 Real Blues Festival of Orange County and the 1st annual Kern River Blues and Rock Fest. The Hard Rock CD ‘Through The Rain’ was released November 11th, 2011 on LeRoi Records and includes the single ‘By The Way’ which features a guitar trade-off solo between Alastair and Ty Tabor from King’s X.

In 2013 Alastair released ‘Now & Again’, a 15 song compilation CD of previously released and un-released recordings. The Alastair Greene Band was chosen to represent the Santa Barbara Blues Society at the International Blues Competition in Memphis, TN. Alastair continued to tour extensively with Alan Parsons in 2013 playing close to 50 shows in Italy, Germany, Switzerland, Holland, India, Bulgaria, and the United States.

In January 2014 the Alastair Greene Band signed to Delta Groove Productions / Eclecto Groove Records and released the Blues-Rock album ‘Trouble At Your Door’ on June 17th, 2014.

In November 2014 Alastair toured with Starship Featuring Mickey Thomas. Alastair filled in on lead guitar for guitarist John Roth who was on tour with the rock band Winger. On tour, Starship opened several shows for Lynyrd Skynyrd and performed such classic hits as ‘Fooled Around And Fell in Love’, ‘We Built This City’, ‘Sara’, and ‘Find Your Way Back’.

In January of 2017 the Alastair Greene Band signed with the PIEDMONT TALENT for World Wide booking. Tina has decades of experience in the Blues-Rock world and worked extensively with the late Johnny Winter.

In May 2017 Alastair left the Alan Parsons Live Project to focus on his solo career and other endeavors. A new Alastair Greene record is due for release in the fall.

: “Sebastian Lane, at just 2 years old, strummed on the clear nylon strings of a plastic yellow guitar. At age 3, a naked Lane head-banged atop his toy chest, curly black hair whipping around his face as he jammed on his guitar while “Hey Joe” by Jimi Hendrix played on the stereo. Eyes scrunched and head down, he mastered his “guitar face.””
— OMAHA MAGAZINE
Sebastian Lane is a fierce young guitarist whose roots dig deep into music history. He is the grandson of Blues Hall of Fame legend, Jimmy Rogers, who gained prominence as the guitarist for Muddy Waters before starting his independent career with Chess Records. Sebastian’s father is blues-rock hall of fame artist Jimmy D. Lane, who has played with the likes of Eric Clapton, Mick Jagger, Jim Keltner, Keith Richards, B.B. King, Van Morrison, Jonny Lang, Gary Moore, Double Trouble, Taj Mahal, Stephen Stills, Jeff Healey, Lowell Fulson, and Snooky Pryor, Kim Wilson, Pinetop Perkins, Johnnie Johnson, Kim Wilson, Robert Plant, Jimmy Page, David ‘HoneyBoy’ Edwards, Little Hatch, Willie Kent, Henry Gray, Lazy Lester, and of course his father, Jimmy Rogers; just to name a few. But, the truly fascinating thing about Sebastian Lane is that music is actually just his side hobby. His day job is balancing a future career in medicine. He is currently a medical student at The University of Nebraska Medical Center and will graduate with his M.D. in 2019.

Sebastian has played for several different artists throughout his career before deciding to focus on his own music where he now plays with the Sebastian Lane Band. He still plays for some artists including Jocelyn who just signed with BMG records. With her, he’s had the opportunity of opening for artists such as Darius Rucker. Where he truly shines though, is in his element with the Sebastian Lane Band. This group is a modern age blues-rock group with the goal of keeping fun live music around and exposing the genre to their peers while playing music that every generation can appreciate.The group features Ben Curran on lead and rhythm guitar, Dain Armbrust on Bass, and Kevin Fries on drums. All of these musicians made their start through the Omaha Blues Society and their program called Blues Ed. Ben currently studies guitar and was accepted into Berklee College of music. Both Dain and Kevin have made a name for themselves playing for several different Omaha and Lincoln based blues bands over the years.