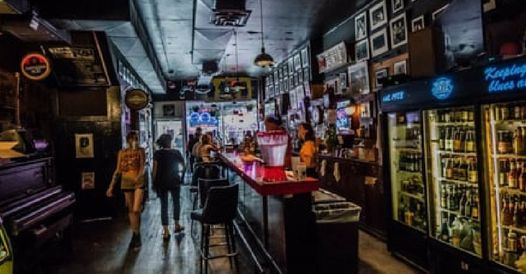 A note from Josh Hoyer and an event at Lincoln’s Zoo Bar to help Kelly Streeter, who was the owner of Lippy’s BBQ in Malcolm where Kelly hosted an annual blues fest.

From Josh: On June 23rd, 2019 Kelly Streeter suffered an anterior cerebral artery stroke.
This type of stroke is rare. Especially for a 52 year old man.
He lost all mobility to the left side of his body neck down. This type of stroke also effects your executive functioning.
“Skills such as inhibition/impulse control, flexible thinking, emotional control, task initiation, memory and attention, planning, organization of self and materials, and self-monitoring”.
On June 28th, 2019 Kelly had surgery to remove a massive blood clot in his carotid artery. He has a 6 to 7 inch if not more incision in his neck.
At this time the doctor was for lack of better word “impressed” by the size of the blood clot in his neck and was again for lack of better word “surprised” that he survived the surgery.
At this time they were informed that he had another stroke.
It’s possible he had more than 2 stokes but they were not for sure.
A few days later he attempted to stand from his hospital bed not remembering his left side was immobile and broke his left leg.
In July of 2019 Lippy’s BBQ closed it doors.
Today Kelly is gaining strength both physically and mentally.
This celebration is to bring folks together to raise spirits and a little bit of dough for our friend.