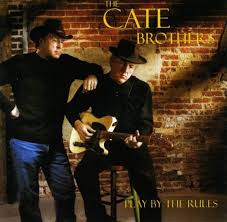 The Cate Brothers are the singer-songwriter-musician duo of Earl and Ernest (Ernie) Cate (born December 26, 1942), twin brothers from Fayetteville, Arkansas, who in the mid-1960s became performers of country soul music at clubs and dances in Arkansas and elsewhere in the mid-South of the United States.[1] Both brothers are singers, with Earl playing guitar and Ernie playing piano. They were recording artists during the mid- to late 1970s and again from the mid-1990s through the first decade of the 2000s.

In their hometown of Fayetteville in the 1950s, where rock-and-roll pioneer Ronnie Hawkins had also grown up during the 1940s, Hawkins owned and operated the Rockwood Club. Other early rock musicians came to play there, including Jerry Lee Lewis, Carl Perkins, Roy Orbison and Conway Twitty.

In 1975, Helm introduced the Cate brothers to a record company representative in Los Angeles. The brothers soon after received a recording contract with Asylum Records, and so began their recording career.[2]

Their self-titled debut album released in 1975 was produced by guitarist Steve Cropper. He also performed on the record along with Levon Helm, Donald “Duck” Dunn, and Poco bass guitarist Timothy B. Schmit (who later joined the Eagles). The album contained the duo’s only Top 40 single, “Union Man”, which spent 20 weeks on the Billboard Hot 100, peaking at #24 in May 1976.[3]

Two more albums followed, In One Eye and out the Other in 1976 and Cate Bros. Band (with drummer Terry Cagle and bassist Ron Eoff) in 1977.

In 1979 they reached a wider audience when they appeared on the PBS music television program Austin City Limits, taped in December 1978.[4]

In 1979 the brothers released their fourth and final album of the period, Fire on the Tracks, which reached number 24 on the album rock charts on the success of “Union Man”. That single was one of the songs they had performed during the Austin City Limits television show, leading up to the album’s release.

During the 1980s they issued no recordings, though they remained a popular touring act around the southern country rock and blues circuit of the Tennessee and Arkansas region.

In the early 1980s, the brothers joined Levon Helm, Rick Danko, Richard Manuel, and Garth Hudson in a revival of the Band (without guitarist Robbie Robertson) and also worked with singer Maria Muldaur.

The Cate brothers resumed recording in the mid-1990s, releasing five albums on independent labels from 1995 to 2009.

Porky Hill, the drummer for the Cate Brothers Band for 12 years, died in September 2000. Ron Eoff’s brother Mickey then joined the band.

BRANDON SANTINI BIO
There are many different opinions as to what the future of the blues harmonica will be. Memphis vocalist and harmonica player Brandon Santini is undeniably a worthy player to keep an eye on as the latest surge of young blues artists leave their footprint in blues history. His name is worthy of conversations that include James Cotton, Kim Wilson, Dennis Gruenling, Charlie Musselwhite and other frontline harmonica players by combining his love and respect for traditional blues with a present, colorful style of playing that is often compared to James Cotton or Paul Butterfield. Raised in the Piedmont region of North Carolina, Brandon purchased his first harmonica in 1997 at the age of fifteen when his mother took him to the local music store upon his request. He founded the Blues Music Award nominated band Delta Highway in 2003 and relocated to Memphis where he absorbed the sounds and culture of the Delta and North Mississippi Hill Country, honing his craft night after night, sweating it out in local Beale Street clubs just like Robert Johnson, Muddy Waters, and B.B. King did decades before him.
Live & Extended! is Brandon’s third album released in January 2015 by VizzTone Label Group. The scene is Quebec’s upscale concert venue, le Petit Impérial, on a Sunday night in July, in the middle of the exuberant Festival D’été de Quebec. The packed house responds quickly as Brandon Santini and his tight touring band hit the stage with all the raw blues power and impact of the 1970s-era Paul Butterfield or James Cotton Blues Band. The band feels the energy and responds with over an hour of the hard-hitting harmonica-driven blues that’s been causing fans and critics alike to tap Santini as one of the most quickly-rising blues stars of his generation.

For Brandon Santini, “It’s all about the vibe of your surroundings. With a great live audience fueling you it’s a lot more inspiring and allows you to give more to the audience.” He has steadily built his fan base with two previous albums, and tours regularly. His A-Team road band includes Timo Arthur on guitar and backing vocals, Nick Hern on bass and backing vocals, and Chad Wirl on drums.

BluesEd bands Vertigo and Far & Wide will open the show at 3:30pm.