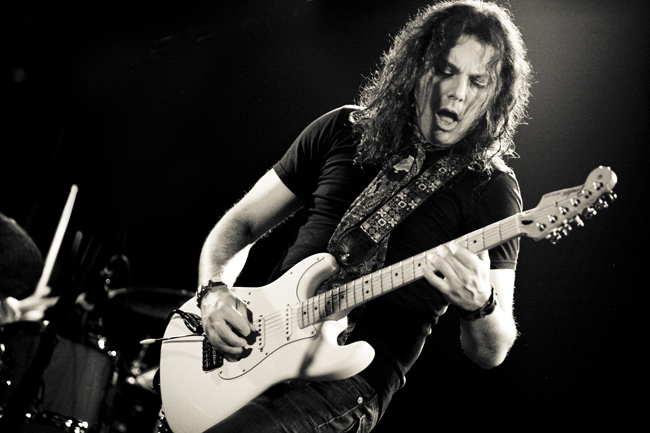 Saddle up with Anthony Gomes and the New Soul Cowboys, as the award winning, acclaimed tough-rockin’ soulful singer-guitarist and his rough ‘n’ tumble Nashville-based outfit, are ready to take on the world.

“First and fore most, we are Southern Rock,” Gomes says. “We mine rock, blues, country and gospel in our soul sonic force.” The bands scorch and riot sound is definitely right in line with the best of Southern Rock past and today’s roadhouse blues and rockin’ country. In fact, a Soul Cowboy alumnus is none other than that Redneck Woman herself Gretchen Wilson, right out of the Nashville “Music Mafia”.

“There’s a place on the sonic landscape where Jimi Hendrix, Hank Williams Jr. and Muddy Waters all meet. That’s where we live,” Gomes says. “It’s like the four corners; we are the four horsemen, the four aces.”

The band’s spending this summer in the studio honing the tracks for its self-titled debut and will also be releasing a DVD in the fall.

The group’s Southern Rock credentials are unquestionable. They collaborated with Jim Peterik, chief songwriter for .38 Special, and Tom Hambridge who writes with Skynyrd and Van Zant. Gomes has shared the stage with Gretchen Wilson, Big and Rich, James Otto and blues legends BB King and Buddy Guy. The group also tears it up live and has played shows with Lynyrd Skynyrd, .38 Special, the Doobie Brothers, and Cross Canadian Ragweed, among others.

The blazing’ songs say it all: “Rebel Highway,” “Purple Whiskey Sack,” and that musical mission statement, “New Soul Cowboy.” The crunchy “What It’s All About” is a prime slice of catchy-riffing Southern Rock while “Born To Ride” is roadhouse blues, southern fried with a recipe that goes back to classic Allman Brothers.

The wild wild west gets wilder in the stompin’ “Painted Horse,” a motorcycle anthem if there was one, with it’s you-can’t-help-but-sing-along “bang bang bang giddy-up bang bang” chorus, plus references to Hendrix and Johnny Cash as Rock and Country history share a beer and a shot bellying’ up to the bar.

“We’re like a Hillbilly Guns N Roses,” Gomes says. “We aren’t afraid to rock, but we have some dust on our cowboy boots.”

No doubt about it, Southern Rock is on the rise again and the New Soul Cowboys are leading that revolution. “Nashville is an exciting place, a breeding ground for musical hybrids,” Gomes says. “The next big thing is definitely going to come out of here. We are a part of this. It’s high noon and I’ve got my six string by my side.”