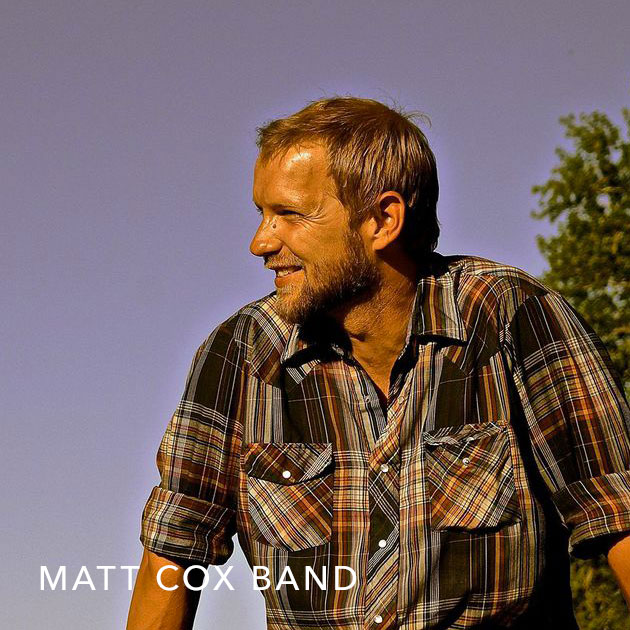 In 2007, Shenandoah, Iowa, native Matt Cox self-released his debut album Folker’s Travels and established himself as a vibrant part of the emerging Omaha, Nebraska singer/songwriter scene. While local stages and small town haunts allowed him to bring his foot-stomping, country and blues to a steady growing fanbase, Cox began to define his singular style by touring the majority of the western United States and eventually spreading his wings through music meccas such as Memphis, Nashville, New Orleans, and Austin, TX.

Since that time, the award-winning tunesmith has been busy recording; My Last Dollar (2009), Tracks In The Sound (2011), Nishnabotna (2014), The Cost Of Everything and the Value Of Nothing (2016), and performing across the country both as a solo artist and with an ever-changing lineup of the area’s top talent. His road-worn vocals and signature harmonica style give the songs a refreshingly authentic and heartfelt sound and help share the storyteller’s unique, yet familiar perspective on the vast canvas of life.

High Places (Sower Records) is the sixth studio album from Matt Cox set to be released on vinyl, cd and digital download on April 20, 2018.

A veteran of the progressive roots music scene, Dustin Arbuckle (Formerly of Moreland & Arbuckle) continues kicking up dust with Dustin Arbuckle & The Damnations. A musician of vast appetites, he’s long held an appreciation for traditional American music in the vein of Charley Patton as well as the cross-pollinated sounds of The Band or Stax-style soul. His work with The Damnations allows for that along with occasionally forays into deep country and even jazz.

The Kansas native marks hearing the Leadbelly classic “Gallows Pole” as his earliest music memory, becoming an astute devotee of the blues by the time he’d reached his teens. “That turned out to be a jumping off point, though,” he says. “I always loved Howlin’ Wolf, but as I got older and started opening my mind to a wider range of music, I’d turn around and listen to the Allman Brothers Band, then Johnny Cash, Sam & Dave, or Tom Petty & The Heartbreakers. I hope you’ll hear some of that reach with The Damnations.”

Arbuckle, who also fronts the Kansas-based acoustic group Haymakers and is a frequent collaborator with multiple other Midwestern roots music acts, released a live Damnations EP in March 2019, recorded at Minneapolis’ Hook & Ladder Theater & Lounge, while laying the foundation for the outfit’s first full-length studio LP. (The group released its self-titled debut EP in 2017.)

Arbuckle says fans will hear an evolution in the new music with feet planted firmly in the world of roots music he’s known for. “When I formed this group in 2017, I really believed anything could happen, from a musical standpoint,” he offers. “What we’ve done since then has gone beyond my own expectations and I really can’t wait to see what we do next.”